Microsoft Launches New Outlook for Mac, Next Office for Mac Suite Coming in Second Half of 2015

Microsoft today announced the immediate launch of a new Outlook for Mac for Office 365 users, bringing a new look and a number of improvements as leaked earlier this week.

The new Outlook for Mac includes: 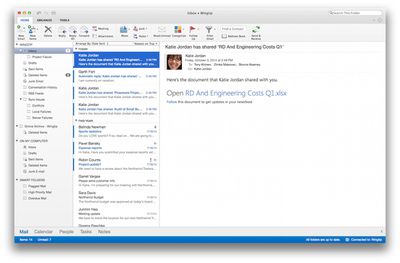 Microsoft also provided an update on the next full version of Office for Mac, noting that development on the suite had been pushed back from its usual schedule due to Microsoft's work on prioritizing mobile and cloud development. The latest roadmap for Office for Mac, which includes Word, Excel, PowerPoint, and OneNote includes a public beta launching in the first half of 2015 and a final release coming in the second half of the year. Both Office 365 and perpetual license versions will launch in the same timeframe. Some details on the next Office for Mac were also leaked earlier this week.

WardC
Still wish you could buy the software outright and own it.
Score: 12 Votes (Like | Disagree)

shareef777
365 only? Why is MS begging companies to move away from their enterprise software?

Also, you should note that it's for Outlook 365 subscribers only. While my company uses Office 365, we have our own internal Exchange servers, so the new Outlook is useless as it won't activate.
Score: 12 Votes (Like | Disagree)

I have hated Outlook for over a decade. When I was doing IT work up until last year I could tell the users that used it rather than Thunderbird; they called for help a lot more often. It's buggy, flaky, unintuitive, and designed by morons. It's the default email client where I work and I use Mail on my iPad most of the time just because I hate it so much. Looking down the list of "improvements" to Outlook I don't see anything that would change my opinion.
Score: 11 Votes (Like | Disagree)

peterdevries
Second half of 2015 for the rest of office? The Microsoft Mac team has been sitting on their hands for 4 years. :mad:
Score: 9 Votes (Like | Disagree)

Dominos server is light years ahead of Exchange! Its model has always been better than the pile of garbage known as Exchange. Storing mail files in one huge database is a cluster-F and makes backing up and restoring a nightmare. Compared to a file for each user.

Domino also has clustering built in that works, groupware functions that are better than *****Point. And the best part is you can run Domino on just about any OS: Windows, Linux, OS X, AIX, AS/400, HP/UX, etc. Unlike Exchange that is tied to AD/Windows.

The client needs help but again, you get 100% compatibility over Windows, OS X, and Linux. Version 9 of Domino has gotten better and has a decent look and feel.

Sorry, Exchange/Outlook like most of what Microsoft makes is garbage! Ask any IT person about PST files and you'll get an earful!