Earlier this year, rumors suggested that Microsoft was preparing to launch a new version of Office for Mac in 2014, and now images of what is said to be a new version of Outlook have surfaced on Chinese site cnBeta [Google Translate], suggesting Microsoft is drawing closer to releasing updated Mac Office software.

Depicting "Outlook for Mac 16," the images show a new version of Outlook that's been updated with a new OS X Yosemite-style look, adopting translucent menu elements and a flatter overall design. The interface takes on a "simple, modern style," according to cnBeta, which is "more intuitive" and it includes support for Retina displays much like Office 2011 for Mac. 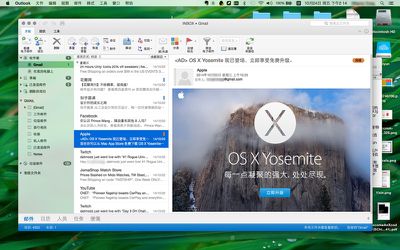 The design is said to be more unified with both the Windows version of Office and the iPad version, making it easier to switch between platforms. The new Office for Mac and Outlook for Mac are said to take advantage of cloud file sharing, allowing users to swap between devices and to collaborate on projects. It's also much simpler to share documents with an entire team and Outlook for Mac will integrate with OS X Yosemite's Notification Center.

Microsoft's last major Office for Mac release came in October of 2010, more than four years ago, and there's been little information about an updated version of the software since then.

A presentation given earlier this year by Thorsten Hübschen, Business Group Lead at Microsoft Germany, suggested that Microsoft would debut a new version of its Office productivity suite for the Mac in 2014, and a Microsoft representative later confirmed that employees were "hard at work" on the next version of Office for Mac.

But with this leaked version of Outlook reportedly carrying the version 16 label and Microsoft only nearing a public preview of Office 16 for Windows ahead of a launch next year, the company's plans are somewhat unclear. Mac versions of Office typically follow their Windows counterparts by only a few months, but it has been two years since the launch of Office 2013 for Windows (version 15) and a corresponding Mac version has yet to appear.

topmounter
When I was a kid we had to use Outlook while we were walking to work uphill in three feet of snow with only some warm broth in our bellies. Oh my those were the days. Hopefully our children won't have to suffer as we once did.
Score: 17 Votes (Like | Disagree)

ON all that is GOOD, please let this come out before Christmas! I'm so over the Mac Suite at this point; there ARE SO MANY FEATURES left out on the MAC Version it's so annoying! I truly hope this is soon; a friend who works for Microsoft told me that it's been done for a while and that Apple is holding them back from release?

Apple can't hold Microsoft (or anyone else) back from releasing OS X software.
Score: 5 Votes (Like | Disagree)

wakey
The sooner the better if you ask me. Outlook (and Office 2011) massively need updating. If it looks like Onenote/Office on the iPad then I'm all for that.
Score: 4 Votes (Like | Disagree)

Looks as fugly as ever. Why does all Microsoft software have to look so bloated and ugly?


Because it includes every feature one may ever need to use, no matter the specific user.

Apple's philosophy of simplifying its productivity suite makes its basically unusable in the workplace.
Score: 3 Votes (Like | Disagree)

Erastopic
I was expecting Microsoft to release updates for their Apps on Mac for Yosemite. Their Outlook, Word, Excel and PowerPoint userbase is pretty big on Mac despite Apple having their own iWork suite that is not really too attractive to everyone.

With me using both Windows and Mac, one for work and one for personal/work use I have to use Microsoft for that reason.

If they have an update coming for Outlook, I guess Word and the others will get updates soon too.
Score: 3 Votes (Like | Disagree)
Read All Comments