iPhone 6 and 6 Plus Boost Apple's Customer Base in Europe, but Market Share Slightly Down in U.S.

Research firm Kantar WorldPanel has released a new report (via TechCrunch) highlighting global smartphone sales over the July-September period which saw the debut of the iPhone 6 and iPhone 6 Plus. The report found that Apple's market share in major European markets is now higher when compared to the prior-year-period that saw the debut of the iPhone 5s and iPhone 5c. However, Apple's share in countries like the United States and Japan were found to be lower when compared to the same timeframe last year. 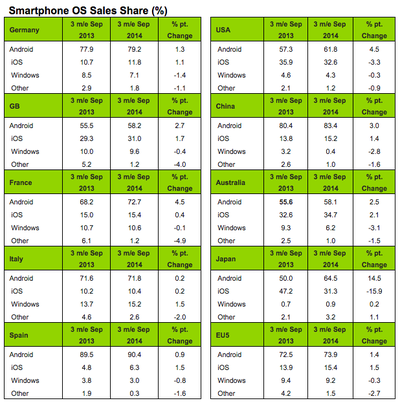 Across Europe’s top five markets, the iPhone 6 has outsold the larger iPhone 6 Plus by five-to-one.

In the US, market competition has been reinvigorated with LG and Motorola increasing their shares. The recently launched LG G3 and Motorola Moto X are better positioned to compete with flagship products from Samsung and HTC. Smartphones sales grew 35% over the past year in the US. Despite Apple’s share declining 3 percentage points in the three months ending in September, compared with the same period last year, it is clear that demand for the iPhone 6 has been very healthy.

It's almost half of Androids share and dropping, I'd say Apple is starting to lose some of its appeal, especially after some of the missteps lately.


Why would they want an iPhone, they're nothing special, especially compared to more expensive Android phones, I wouldn't want people to think I have an iPhone, I like to be a bit different to the herd mentality.

Your first response more or less states that iPhones are in the minority, and your second point states you don't want to be seen with an iPhone, and want to be different than the "herd mentality".

So to clarify, you actually are subscribing to the herd mentality, in going with the more popular Android platform, and joining the masses. ;)

I guess that makes me a herd extrovert, as I have devices form both within my possession.
Score: 15 Votes (Like | Disagree)

apparatchik
What a misleading title, the iPhone 6(+) wasnt even available in some of these countries in the covered period, and just a few days of it in the ones it was available, how can you state "iPhone 6 and 6 Plus Boost Apple's base in Europe, down in the US"?

Could it be people were actually holding purchase through out this period?

Wouldn't you need a full quater availability to see what the iPhone 6(+) impact in market share really is?

Besides, I have had $100 Android phones for development purposes, they're not really smartphones, they're not even good feature phones, as they lag so much making calls and texting becomes an enduring test of patience and frustration. It just allows people who doesn't know better to think they have a "smartphone".
Score: 14 Votes (Like | Disagree)

hachre
Market share for Germany cannot be right. I know only one guy who uses an Android phone - everybody else bought a new iPhone this season and I know many people.

Why would they want an iPhone, they're nothing special, especially compared to more expensive Android phones, I wouldn't want people to think I have an iPhone, I like to be a bit different to the herd mentality.

Since when are Apple buyers the herd? The market share says otherwise. If anything the Samsung Android buyers are the herd...
Score: 9 Votes (Like | Disagree)

RockSpider
Looks like America is finally waking up to the fact that there are other alternatives, good to see.
Score: 9 Votes (Like | Disagree)
Read All Comments

Monday July 26, 2021 4:53 pm PDT by Juli Clover
During a Tesla earnings call that took place today, Tesla CEO Elon Musk spent time sniping at Apple, reports CNBC. Musk criticized Apple's "walled garden" and made comments on the company's cobalt use. In a discussion about plans to allow Tesla competitors to use the Tesla electric vehicle charger network, Musk said that Tesla does not want to create a walled garden to "bludgeon" Tesla...
Read Full Article • 349 comments