Back in January, we highlighted graphics issues being experienced by a number of owners of 2011 15-inch and 17-inch MacBook Pro models, with many users needing to pay for (sometimes multiple) expensive logic board replacements due to the issue. The apparent widespread nature of the issue has led to claims that it is a manufacturing defect that should be covered by Apple, with a change.org petition seeking relief from Apple now exceeding 20,000 signatures and affected users organizing in a Facebook group of over 5,000 members. 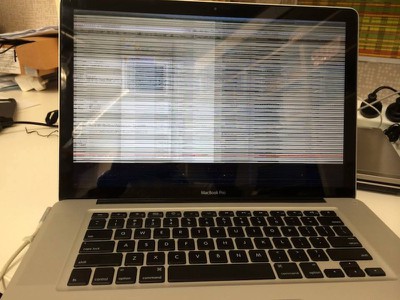 We noted in August that law firm Whitfield Bryson & Mason LLP had begun researching the issue, soliciting feedback from affected users to determine whether a class action lawsuit against Apple might be warranted. The firm apparently found sufficient reason to proceed as it has announced today that it has indeed filed suit against Apple on behalf of affected consumers.

Our firm recently filed a class-action lawsuit in a California federal court against Apple, Inc. on behalf of residents in the States of California and Florida who purchased 2011 MacBook Pro Laptops with AMD GPUs who experienced graphical distortions and system failures.

The firm is continuing to solicit feedback from affected users and is considering filing actions in other jurisdictions around the country.

The lawsuit lays out the plaintiffs' argument that the issues stem from hardware defects related to the lead-free solder used on the AMD graphics chips in the 2011 MacBook Pro models.

The suit goes on to note that Apple's only solution offered for the issue is complete logic board replacement, but that the remedy is ineffective as replacement parts use the same solder and fail in the same way, sometimes within days. Apple has also in many cases charged consumers for the repairs and has refused requests to reimburse consumers for repairs paid for out of pocket.

Drawing parallels to similar graphics issues in the 2008 MacBook Pro that ultimately resulted in a recall by Apple, the plaintiffs in this case request that Apple acknowledge a defect in the 2011 MacBook Pro models, notify owners of the issue, bear the costs of inspection of affected machines, and pay the full costs of repairs and damages. The suit also requests that users who have paid out of pocket for repairs be reimbursed for their expenses.

maflynn
Good, hopefully this will get apple to cover the laptops and repair them for free. The 2008, 2010 and 2011 all have dGPU issues, its ludicrous that apple refuses to acknowledge this issue and fix the affected computers.
Score: 37 Votes (Like | Disagree)

binaryspiral
In the end, the lawyers win.
Score: 20 Votes (Like | Disagree)

You are parroting a myth. Do you know the cost to bring a class action?

I've been in a few class action lawsuits - which neither makes me a lawyer or an expert on CALs, but I pay attention... Micron ram price fixing, Apple monitor size false advertising, iTunes book sale price fixing, and a few others...

Every time I've seen a pittance of a refund that accounts for a single percentage point of the amount of money I was wronged. But the lawyers get 40-50 million - which accounted for about 40% of the CAL.

And the defendant lawyers get paid, too.

netdoc66
My 2011 MBP died a day after installing Yosemite which many have done. I've relied on Apple for most of my career. Where do we go if they won't support the professional hardware they slap their apples on?
Score: 14 Votes (Like | Disagree)