iFixIt has conducted its teardown of the brand new Mac mini, finding that the new device is more difficult to open than previous models. They've also discovered that the RAM is soldered onto the machine, which was first discovered late last week. 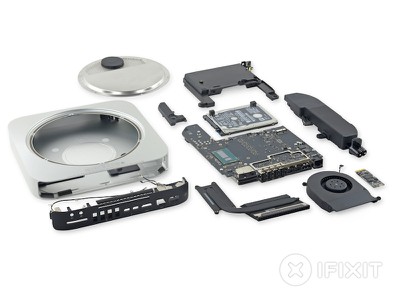 The team found that gaining entry into the new desktop is more difficult than previous models. Instead of a twistable bottom cover, the new Mac mini requires a plastic opening tool to pop off the cover. Underneath that is a new solid door that blocks easy access to the RAM and fan. The door uses what iFixIt calls "the smallest Torx Security screw" they've ever seen, requiring their tool design team to prototype a new screwdriver to open the desktop.

Inside, the Mac mini now sports a new AirPort card that connects straight to a PCIe slot rather than via a cable. Unlike past Mac minis, the new version only contains one SATA port. Previously, Mac mini users could upgrade their desktops with an extra hard drive. However, iFixIt notes that there is an extra socket that could potentially be used for a SSD blade via a PCIe cable. Oddly, the new Mac mini's power supply is identical to both the 2012 and 2011 models.

Finally, iFixIt gave the new Mac mini a repairability score of 6 out of 10, which is a worse score than the 2012 Mac mini's 8 out of 10. Although disassembly is straight forward, the team noted that the presence of Torx security screws and soldered on RAM made it more difficult to repair than previous models.

Wild-Bill
What a steaming pile of fail.
Score: 144 Votes (Like | Disagree)

DeanL
The "new" Mac Mini is a real deception.

Here comes the "Pro's" complaining how stupid it is that Apple soldered the RAM so the .01% of people who open up and upgrade heir components can't.

Where's your logic here?
Because somebody paid something $500, it should not be upgradable?
Just want to remember you that your $2,500 new Mac Pro is less upgradable than it used to be in the previous generation.
Score: 112 Votes (Like | Disagree)

With the last version, Apple specifically advertised the "Twist Off" accessibility:

Add memory with a twist.

Mac mini comes with 4GB of fast 1600MHz DDR3 memory. And thanks to a removable bottom panel, its easy to add more. Just give it a twist, and youre in. Pop your new memory into the SO-DIMM slot, and youre out. Or you can configure your Mac mini with up to 16GB of memory from the start at the Apple Online Store.


Apple used to advertise how accessible their machines were (the G3, G4, and G5 towers in particular). It's one thing to make a machine more closed off, such as the portables, if it allows more room for a bigger battery or a thinner machine, but has anyone ever complained that a Mac mini was too big or too expandable?
Score: 108 Votes (Like | Disagree)

Here comes the "Pro's" complaining how stupid it is that Apple soldered the RAM so the .01% of people who open up and upgrade their components can't.


You Apple white knights are getting really old.

No one expects Mac Pro performance, they expect performance better than the OLD MAC MINI.

The new one is a step backwards with the soldered ram and slow cpus.

scotsrule08
This saddens my little heart

The original Mac mini (core solo) (yes core solo, not duo, not core 2 duo) was the first (modern) Mac that I had. We went through countless upgrades including hard drive, RAM, and even a processor swap. I went from the core solo all the way up to the core 2 duo. I learned a lot from those experiences, and now electronics repair is my job.

If I ever wanted to cry, it would be now
Score: 87 Votes (Like | Disagree)

Blackstick
I would have accepted soldered RAM had Jony and co built a new enclosure that was 70% smaller/thinner and thus required flash disks and a tiny Logic board, but that's NOT what happened here. This is just punitive to those wanting to buy into the Mac product line for less $, and it also serves to alienate would be PC switchers that are somewhat accustomed to easy RAM upgrades, minimally.

If Apple came out and said, "hi, so this new Mac mini is truly Mini, it's the same size as a Rubicks cube or a few decks of playing cards!" Then I'd accept a sealed device with no upgradable anything, but they just got lazy and sealed what was previously a viable product.
Score: 81 Votes (Like | Disagree)
Read All Comments