Apple has taken its online store down to prepare for the launch of iPad Air 2 and iPad mini 3 pre-orders. When Apple announced the two new tablets, it said pre-orders would be available starting on October 17, although the company did not specify when exactly pre-orders would start.

Given the short amount of time between the announcement of the iPad Air 2 and the iPad mini 3 and the start of pre-orders, it is unclear whether other retailers and carriers will be prepared to offer iPad pre-orders. 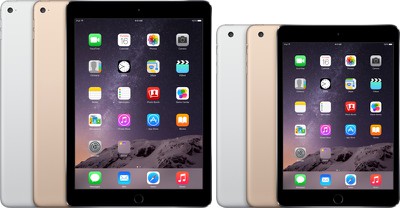 Apple has not announced when the iPad Air 2 and the iPad mini 3 will be in stores or when the two tablets will begin shipping out to customers, giving only an availability date of "later next week."

ghsNick
The iPad Air 2 is the only reasonable upgrade. I can't believe what they did to the Mini 3.

With 5 options Apple's iPad lineup is a mess.
Score: 30 Votes (Like | Disagree)

It seems fairly obvious -- why emphasize a spec that, by design, they intend to upgrade very slowly to preserve margins, and is also poorly understood by non-tech savvy consumers, the bulk of Apple's market.


It's obvious they don't want to talk about it (Ars Technica asked yesterday but Apple refused to say). Yet there's plenty they talk about that non-tech savvy consumers wouldn't understand. Apple should be able to own the decisions they make. If they feel 1GB RAM is sufficient in the iPad then own it, don't hide it.
Score: 8 Votes (Like | Disagree)

Nozuka
with ipads you can usually just walk into a store and get one on launch day..
Score: 7 Votes (Like | Disagree)

I think they need to cull a couple from their lineup and keep things simple. Although cheaper iPads do get people into the ecosystem, it just seems complex, especially for people who aren't a member of a forum like this and know tech. Apple prided themselves on simplicity.


Steve Jobs would have bitch slapped the person who came up with the idea of selling 5 iPads simultaneously.
Score: 6 Votes (Like | Disagree)

mlody
When I see those messages "apple store down" I think, what a bunch of amateurs. Who does this stuff like this in this time and age? Don't they have development and stage environments where they can update the sites internally ahead of time and test everything and just make the new stuff available in the flip of the switch?
I do not think of any e-comerce website that shuts down its operations for several hours just to put 2 new products online? Doesn't that hurt the revenue? Imagine if Amazon was down for half a day so they could add few new products? It seems like Apple still in 90's when it comes to this process - unbelievable.
Score: 6 Votes (Like | Disagree)

ArtOfWarfare
Was just going to report this.

About freaking time - I've been refreshing and trying to buy it for the past 2 hours now. I don't want to be one of the people who gets an estimated delivery time of December - my fiancee's birthday is in late November and this is what I plan to get her (she's been asking for one for the past 2 years. I just got a pay raise this year, so now is the time.)
Score: 6 Votes (Like | Disagree)
Read All Comments