OS X Yosemite is available from the Mac App Store as a free download for all eligible Macs. [Direct Link]


First introduced at WWDC in June, OS X Yosemite will do for the Mac what iOS 7 did for iOS devices. The new operating system introduces redesign that focuses on a flatter, more modern look that emphasizes translucency, smarter controls, and streamlined toolbars.

OS X Yosemite doesn't just bring a fantastic new look to the Mac, it also includes several major features introduce unprecedented levels of integration between iOS and OS X. With Continuity features like Handoff, for example, users can begin a task on one device and finish it on another with a seamless transition. SMS relay features, meanwhile, will let Mac users answer calls from their iOS devices.

Other improvements include a "Today" view in Notification Center that integrates with third-party apps and an improved Spotlight search that pulls data from new sources. Several core apps have been updated with new features, with Safari gaining a revamped look and Mail gaining tools like Mail Drop, for handling large attachments, and Markup, for annotating images right within email messages.

Macs will need 2GB of RAM to run Yosemite, along with 8GB of storage. Snow Leopard must be installed for Mac App Store access, but the Yosemite software itself is available as a free download, much like Mavericks was last year.

Update: Many users are seeing a "Temporarily Unavailable" error when attempting to download Yosemite as it just hit the App Store, but it should be available shortly.

*more picture of not available* 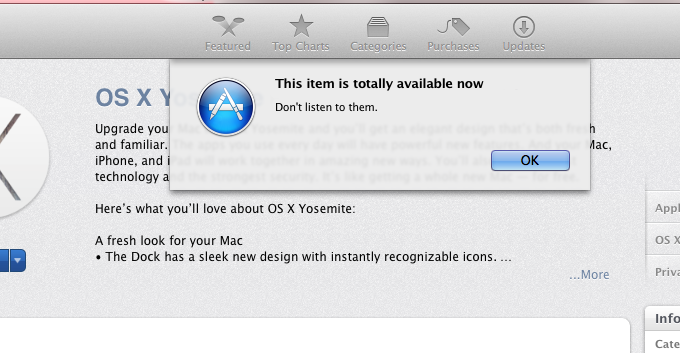 Windows 8 does more and Windows 10 will do much more. I can buy a new computer and put in a password and everything is the same, also on a tablet, and soon the phone.

newagemac
Epic! All this nice integration between Mac OS X and iOS makes me glad I chose the right ecosystem. :-)
Score: 10 Votes (Like | Disagree)