IDG today announced plans to put its annual Macworld/iWorld Expo on hiatus, which means the San Francisco event planned for 2015 will no longer take place. Macworld/iWorld, held annually, has long been one of the major Mac-based trade shows, dating back to 1985. 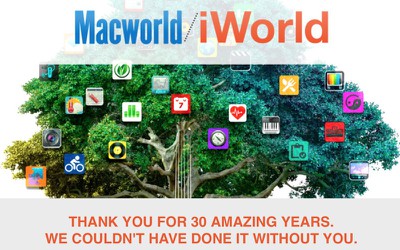 Macworld/iWorld will not take place in 2015 and the show is going on hiatus. The show saw a remarkable 30 year run that changed the technology industry, provided an important forum for Apple developers to bring new companies and products to market, delivered world class professional development to Apple product enthusiasts, and fostered the development of one of the most dynamic professional communities in the tech marketplace.

Though the shuttering of Macworld/iWorld comes as a surprise, the expo's popularity has been on the decline in recent years. Prior to 2009, Apple attended the event and used it to unveil new products, drawing thousands of attendees, but the company pulled out of the conference after 2009 and instead began hosting all of its own events.

Along with the Macworld/iWorld hiatus, Macworld also recently laid off several of its editorial staff members and shut down its print magazine. IDG's wording "hiatus" in the statement suggests that Macworld/iWorld could potentially return in the future, and the company still plans to hold its enterprise-focused MacIT event in 2015.

HenryDJP
I stopped going 2 years ago. I've been to every Macworld since 2003. I live only 15 minutes away from the city. It was always an amazing show of products. Better than CES. After Apple left it was just "Okay" but then the big vendors stopped showing up and the venue got smaller and smaller and very boring. This news article is funny because I am not at all surprised it's ended. The only thing I am surprised about is it didn't close down over 2 years ago.

Cue the "Steve would have never pulled out of MacWorld"... when in fact it was him who decided.


Then you've defeated your own argument. :p
Score: 14 Votes (Like | Disagree)

dwman
Sadly, the writing has been on the wall since Apple pulled out. Unfortunately, 10 booths with different iphone cases wasn't going to cut it long term. It was fun while it lasted. :(
Score: 14 Votes (Like | Disagree)

Though the shuttering of Macworld/iWorld comes as a surprise...


How was it a surprise? It was never a surprise. We know a few years ago that it would eventually disappear.
Score: 13 Votes (Like | Disagree)

IJ Reilly
RIP, MacWorld Expo. Thanks for the memories!
Score: 12 Votes (Like | Disagree)

maflynn
Not surprising, these shows are so expensive and if attendance is low, it doesn't make sense.
Score: 12 Votes (Like | Disagree)

dannyyankou
Ever since Apple left, no one cared.
Score: 9 Votes (Like | Disagree)
Read All Comments