Apple has begun preparing its retail employees and retail partners for the upcoming launch of its Apple Pay mobile payments service with a host of new training materials that show the feature in action, reports 9to5Mac.

Users will be able to set up Apple Pay in Passbook or through the Settings app, as up to eight credit or debit cards be connected with an iTunes account or by scanning one in with the iPhone's camera. Every card connected to the service will allow users to access a number of features, including the ability to see a simple transaction list, the ability to turn on push notifications, and an area that allows quick access to a bank's phone number and an accompanying app. Passbook will also be able to automatically update an expired card with a new expiration date without the need to re-enter information.

For Apple's own stores, a customer will be able to return an item simply by holding an iPhone near a payment terminal to give a list of their recent transactions. Receipts from Apple Store purchases will also not display a customer's contact information or credit card number, but will rather show just the last four digits of a device's Apple Pay ID. If Apple Pay is not working properly for an Apple Store customer, retail employees will be able to use the "Apple Pay Demo" diagnostic software that can determine whether a device is having a hardware problem or other issue. For non-hardware issues, customers will be referred to their appropriate credit card providers or banks.

Apple's training materials note that its retail employee should emphasize the simplicity and security of Apple Pay to convince customers to use the service. All Apple Store employees will receive one hour of mandatory Apple Pay training this week ahead of the service's impending launch. The report also notes that Apple has already launched Apple Pay at its Caffe Macs cafeteria located in its 1 Infinite Loop headquarters.

An internal memo addressed to Walgreens employees that surfaced yesterday suggested that Apple Pay may be going live next Saturday, October 18. Apple Pay will be enabled on the iPhone 6 and iPhone 6 Plus through an update to iOS 8. The seeded versions of iOS 8.1 to developers first revealed hidden Apple Pay settings and set up screens, which may indicate that the service might be launching alongside the update.

Apple is expected to detail full launch plans for Apple Pay and iOS 8.1 at its event this Thursday, October 16. The company is also expected to announce its next-generation iPad Air and Retina iPad mini, new iMacs with at least the 27-inch version receiving a high-resolution Retina display, and perhaps even a new Mac Mini.

Mostly because it's not super clear that my credit union Visa won't work. This is in contrast to how google wallet seems to work with any credit card and to the consumer it would make sense that any card that can be used to make purchases through itunes should work. I guess for Apple Pay there is more needed on the back end to work intimately with banks than just processing a credit card payment??? 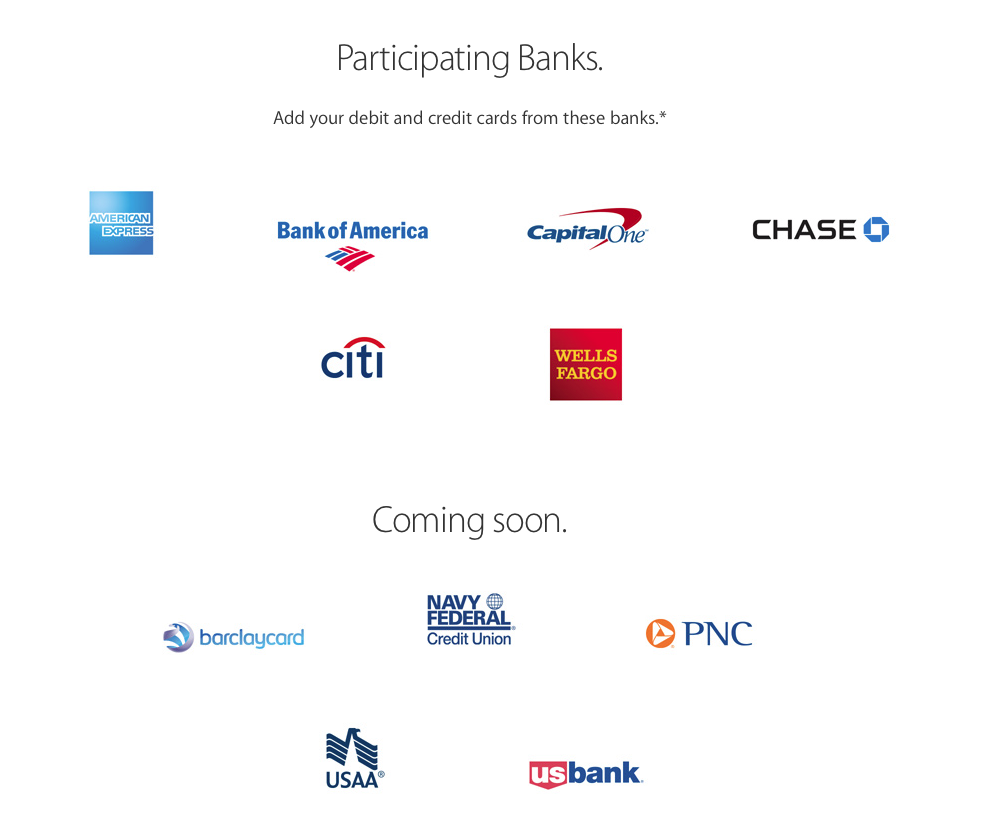 It can't be clearer than that. But you have to have eyes on your face to see it. Not an unreal expectation.
Score: 26 Votes (Like | Disagree)

NY Guitarist
Should be interesting to see how fast Apple Pay is adopted by retail stores in general.
Score: 16 Votes (Like | Disagree)

I don't like the word lure... Impress would be better


Have a feeling the training materials do not say lure. It was used by MacRumors.
Score: 12 Votes (Like | Disagree)

Is this going to be available outside of the United States?

It can't be clearer than that. But you have to have eyes on your face to see it. Not an unreal expectation.

That wasn't necessary. A direct link to the page in your first post would've been sufficient.
Score: 11 Votes (Like | Disagree)

macs4nw
This has the potential to make Apple more $$$ than anything else they've done so far. If the security turns out to be as ironclad as even the financial institutions are now saying, this is going to be a watershed moment for the company.

The potential for earnings growth with their payment system eclipses anything that came before.
Well done Cupertino!
Score: 10 Votes (Like | Disagree)

Apple's training materials note that its retail employee should emphasize the simplicity and security of Apple Pay to lure customers into using the service.


I don't like the word lure... Impress would be better
Score: 10 Votes (Like | Disagree)
Read All Comments