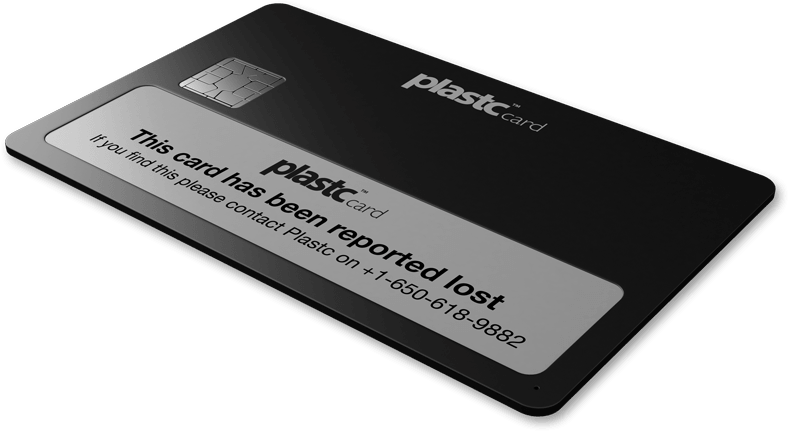 The Plastc card allows users to store up to 20 cards or barcodes on its internal flash memory and ships with a companion iOS Wallet app that lets users manage the card. Plastc looks like a standard 0.8-millimeter-thick credit card, but it features an eInk touchscreen display for selecting stored content, Bluetooth to connect to an iPhone, rewritable RFID, and support for payment technologies such as magnetic stripes, NFC, and EMV chip and PIN. It also includes wireless induction charging and a remote wipe feature that lets users erase the card in case of theft or loss.

Though its feature set is impressive, Plastc will be competing with the upcoming Apple Pay, which is scheduled to launch this month with broad industry support. Apple has worked on Apple Pay with all three major credit card companies, several major banks, and a variety of retail partners such as Macy's, Walgreens, McDonald's, Whole Foods, Disney and others.

Despite this competitive threat, Plastc COO Ryan Marquis told The Verge that he is optimistic about the company's future.

"Ultimately a cloud-based digital wallet will be the winner," says Marquis, "but with our technology, we can allow consumers to build a digital wallet using a form factor that they’re used to today." Marquis says there are still many use cases where we need physical cards like subway ticketing machines, ATMs, and gas pumps. "I will utilize Apple Pay because it’s simple and easy, but there are so many use cases in our world where I’m still going to need a physical card," he says. "There are so many things that point-of-sale machines just aren’t ready for yet."

Similar to Coin which was announced last year and has yet to ship, Plastc is available now only for pre-order. The card costs $155 and is expected to ship next summer.

Zxxv
It has to be free. Sell it to banks not end users.
Rating: 14 Votes

gleepskip
I suppose this could help in filling the gap while we wait for Apple Pay ubiquity, but Plastic's future will be short-lived.

Edit: It's too bad because, a few years ago, a cool card like this would have been drool-worthy.
Rating: 9 Votes

DTphonehome
It's going to be a very long time before NFC-based readers are ubiquitous enough to replace standard magnetic stripe and chip-based credit card readers. This product definitely has a use for the foreseeable future. However, the $155 price tag seems a bit steep.
Rating: 6 Votes

r-m
This is way better than Apple Pay. Especially in the UK.
Looks like this card works with chip n pin, and nfc. Whilst apple pay has it's slow rollout, this card can already be used in many many place and works just like I want out of an all-in-one solution!
Apple pay's current plans won't match this for me. Again, especially in the UK.
Rating: 5 Votes

sailmac
Developed mild interest as I read along. Then got to the $155 price and felt the whole thing deflate like a cartoon balloon.
Rating: 4 Votes

The reason why it is sold to consumers is banks turned down the concept of programmable credit cards over ten years ago. I see this as a loser for several reasons.

1) Confiscations. It now becomes now a technical effort instead of the classic "grab and cut" in front of the customer that has been around since the 70's.


Never seen it and this is not really relavent.

How so? It's no different than now.


3) Loss. You loose this card and you loose multiple credit cards at once.

4) Data integrity. Since it is programmable, what are the chances of data corruption in the Flash memory inside the card? What about card bending, static electricity, humidity and electromagnetic interference? The simple mangetic strip card has been around for almost fourty years because it passes all these stress tests.


Flash corruption? Flash can/does have ECC.
Static electricity? Not a problem as long as you design for ESD resistance.
Humidity? Hermetically seal it. There are no user serviceable parts inside.

None of what you outline has to be an issue in a well thought out design.

5) Replacement. Here the cost is higher. Most banks will send you a new credit card overnight just so you can keep on spending. This company? What is their replacement policy?


You lose it, you pay to replace. It's not like a plastic slab with a magnetic strip that costs all of $.30 to produce.

6) Branding. Banks love to have custom and colorful artwork on their cards. This card reduces the corporate image of the company to an ePaper gray scale display.


And? What's that got to do with my wallet?
Rating: 3 Votes

If you are banking (no pun intended) on this actually being available 'Summer 2015', you're likely in for a rude awakening.

Those who are down on Apple Pay succeeding, yet still think this will be released next year, much less successful, have their scenarios quite backwards.
Rating: 3 Votes

As much as I like project like this. After the fiasco with Coin, I think I'm going to wait. I'm willing to pay for bit more at the end (when there is a product that works), but I refuse to get jerk around by these companies like a moron with my money.


Yeah, I don't see Apple Pay being everywhere for a a while.. but I'm not willing to put down $155 .. yet.. I would LOVE to just dump all my loyalty cards and debit/credit into a single card.

aajeevlin
As much as I like project like this. After the fiasco with Coin, I think I'm going to wait. I'm willing to pay for bit more at the end (when there is a product that works), but I refuse to get jerk around by these companies like a moron with my money.
Rating: 3 Votes
[ Read All Comments ]