Verizon began rolling out its Advanced Calling service earlier this week, enabling voice over LTE (VoLTE) capabilities for select devices that support the service, which includes the iPhone 6 and the iPhone 6 Plus. 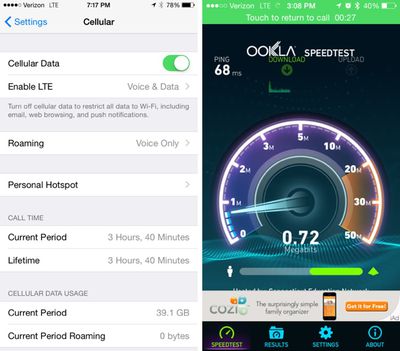 In addition to enabling simultaneous voice and data, Verizon's Advanced Calling features also allow for High-Definition voice calls, which are said to be more "natural-sounding" and Verizon-branded video calls.

Advanced Calling 1.0, a first-generation service suite enabled by Voice over LTE, or VoLTE, technology, is now available on America's largest and most reliable 4G LTE network with XLTE. With Advanced Calling 1.0, there is a clear difference. You will be able to enjoy natural-sounding High-Definition (HD) Voice and a Video Calling experience that's as simple as making a traditional voice call.

Users can enabled Advanced Calling features by visiting the Verizon website and adding the feature to their accounts. Users also need to make sure both Voice and Data are turned on in the iPhone's Settings app. Go to Settings --> Cellular --> Enable LTE --> Tap Voice & Data.

Verizon's Advanced Calling features are limited to the iPhone 6, the iPhone 6 Plus, the LG G2, and the Samsung Galaxy S5.

Macboy Pro
AT&T has had this since the second iPhone. Let me be the first to welcome Verizon to 2008.
Score: 61 Votes (Like | Disagree)

proline
A proper treatment of this subject would also include the reason why older LTE phones are excluded.
Score: 26 Votes (Like | Disagree)

luckydcxx
i guess they now realize that CDMA was a big mistake.
Score: 25 Votes (Like | Disagree)

Where do you have your data from? Cause that's just plain not true.
VoLTE chips are pretty darn new. That's why it's limited to those new devices. LTE was even new in '07. And when I say new, I mean not even finalised.


i think he's referring to how AT&T (or GSM) have always been able to talk and surf on the iPhone at the same time.
Score: 22 Votes (Like | Disagree)

i guess they now realize that CDMA was a big mistake.


Never was a mistake.

CDMA allowed them to have a superb dropped call rate as well as excellent spectral density. Great capacity, especially when the 8k vocoders came along with good voice quality.

Did it match GSM/UMTS in all calling features? No, but apparently that wasn't a deciding factor for millions upon millions of subscribers.

They've done extremely well with CDMA, as have many other leading operators around the world.

In fact, CDMA was so impressive, it became the air interface for UMTS, which is something most people aren't aware of.

Since CDMA was optimized for voice, it's a totally open question as to how VoLTE will perform in comparison. LTE is break before make, while CDMA has soft and softer handoff.

I'm optimistic for VoLTE, especially if not moving quickly and undergoing rapid handoffs, but time will tell.

Saying CDMA was a mistake is uninformed.
Score: 19 Votes (Like | Disagree)

citi
Everything is finally right in the world. Signed loyal verizon customer that was tired of defending himself to ATT folks.
Score: 15 Votes (Like | Disagree)
Read All Comments