With yesterday's launch of iOS 8, devices running the new operating system are now able to install third-party keyboards that work on a systemwide basis. Most of the major keyboard makers were ready for the launch, introducing iOS 8 versions of their keyboards into the iOS App Store. One day after launch, three of these keyboards, including Fleksy, SwiftKey and Swype, are now at the top of the top iOS paid and free charts in the U.S. and other countries.

Within 24 hours of their debut, paid keyboards Swype and Fleksy climbed to the top two spots in the U.S. paid iOS app chart, displacing popular games such as Minecraft Pocket Edition and Five Nights at Freddy's. On the free app chart, Swiftkey jumped to the number one spot, beating out the now freemium and very popular 1Password password manager and the newly launched Amazing Thief game. Perhaps most impressively, SwiftKey has even displaced longtime number one Facebook Messenger from its spot atop the rankings. 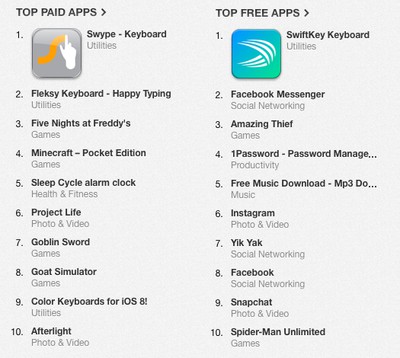 The new keyboards are of course benefiting from launch-day momentum of the iOS 8 debut, and it remains to be seen where they will settle in the charts following the initial surge of interest. Still, it is clear that many users are interested in at least trying out alternatives to Apple's default keyboard, even with its new QuickType suggestions implemented in iOS 8.

iBlazed
I gotta say, I'm not really impressed with the ones I've tried. I still prefer the stock keyboard. But I suppose the more options the better.
Score: 17 Votes (Like | Disagree)

reden
Such a great feature, something I missed from Android. Too bad it logs all your keystrokes and even credit card numbers. That's the only thing that concerns me.
Score: 10 Votes (Like | Disagree)

I gotta say, I'm not really impressed with the ones I've tried. I still prefer the stock keyboard. But I suppose the more options the better.

Perhaps you haven't found the right one yet. I'd suggest the DadaistBoard:

Yelmurc
The stock keyboard is fine for me. But I'm glad we finally have the option of other keyboards.
Score: 5 Votes (Like | Disagree)

gatortpk
I like the current keyboard fine, especially with the new added QuickType suggestions to choose from.
Score: 5 Votes (Like | Disagree)