Apple has begun accepting online pre-orders for the iPhone 6 and the iPhone 6 Plus in several different countries around the world, including the United States, Australia, Canada, France, Germany, Hong Kong, Japan, Puerto Rico, Singapore, and the UK. There have been many technical problems with the load of users, so users in some areas might not be able to reach the website, or the app at this time.

Several U.S. carriers, including AT&T, Verizon, and Sprint are also accepting pre-orders for the devices. Multiple retail stores like Best Buy, Target, and Walmart will be accepting iPhone 6 and 6 Plus pre-orders when the stores open in the morning, at varying times. T-Mobile's website claims it is accepting pre-orders on the 12th, but did not begin taking orders at midnight like other carriers. 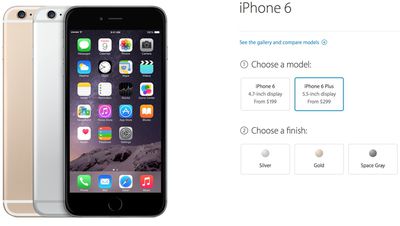 Thus far, there have been few reports on available supply, but it's typically best to make an order right away if possible because in past years, pre-orders have sold out within mere minutes. iPhone 6 Plus supplies appear constrained, as AT&T and Verizon have shipping estimates of 14 to 21 days on several models.

Update: It appears that while the app is up, the website is still down in the U.S. The app is also experiencing issues at times, giving users errors and listing all iPhone 6 Plus models as unavailable. Verizon and AT&T were taking preorders early, but appear to be overwhelmed.

GuitarDTO
BS article to post when the site is down for most. Wake up at 3AM on the east coast for this crap.
Score: 10 Votes (Like | Disagree)

mjbrown87
Remember that time that android phone was so popular that it broke the internet???

jmpage2
Jesus apple, stop being a pain in the ass and fix your crap already. You'd think with the buckets of cash Apple has they could invest in some better web servers and people to handle them.
Score: 7 Votes (Like | Disagree)

kfscoll
God, we really need to get lives. ;)
Score: 7 Votes (Like | Disagree)

yg17
Amazes me how every year Apple manages to **** this process up. You think they'd have learned by now.
Score: 6 Votes (Like | Disagree)
Read All Comments