With less than 24 hours to go until tomorrow's major media event, Apple has begun redirecting its entire homepage in the U.S., Apple.com, to Apple.com/live, which displays a countdown to the event. Apple's move to redirect all homepage traffic to its event countdown is undoubtedly an effort to ramp up anticipation for its upcoming announcements.

Apple's promotion of the event along with its location at the Flint Center, where the original Mac was unveiled, suggests that Apple has something huge in the works for tomorrow's announcements. While Apple's media events are always major affairs, Apple has made an extra effort this year to build up hype for the big unveiling.

Apple has plans to live stream the event on its website and the company will likely stream the event to the Apple TV with a dedicated channel, as it has done for past events. MacRumors will be providing live coverage of the event, both on MacRumors.com and on the MacRumorsLive Twitter account for those unable to watch Apple's live stream.

Tomorrow's event kicks off at 10 a.m. Pacific Time at the Flint Center at De Anza College in Cupertino. Apple is expected to unveil a multitude of new products and services, including two versions of the iPhone 6, its much-rumored wearable device, and its mobile payments initiative.

Populism
Apple's clock is five seconds slower than MacRumors' clock. I am at a complete loss, therefore, of which one to stare at for the next 22 hours.

Maybe I will have two different tabs open with the two clocks and just go back and forth.
Score: 52 Votes (Like | Disagree) 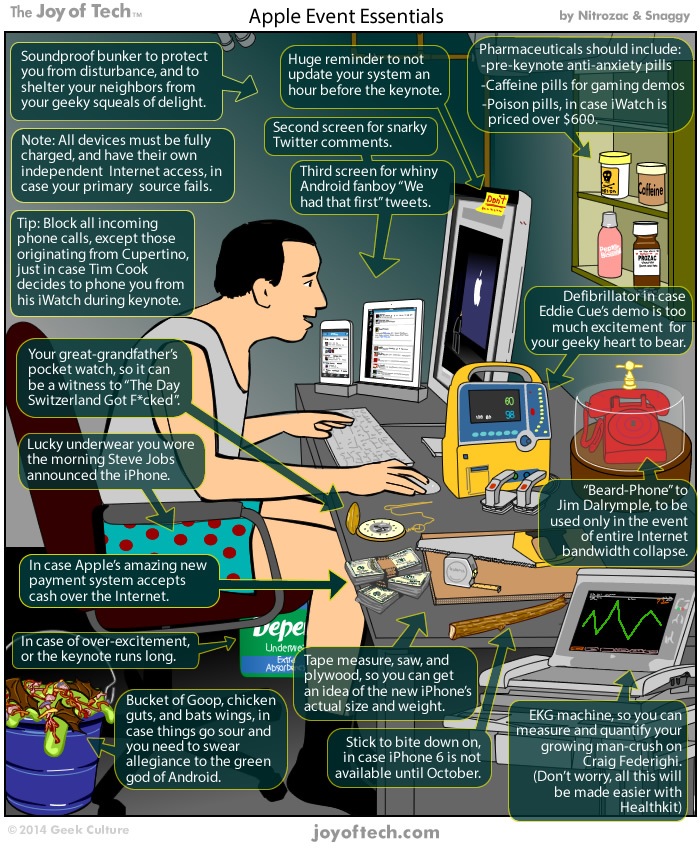 RDeckard
Samsung is saving everyone some time and will now be redirecting to Apple's event countdown page.
Score: 48 Votes (Like | Disagree)

Anyone else nervous about how much hype there is? Seems like the hype machine is in full effect.


I don't think I've ever seen Apple's homepage redirect to a keynote.

Stuff is going down man..It's going down.
Score: 37 Votes (Like | Disagree)

Tuesday October 20, 2020 2:34 am PDT by Tim Hardwick
As we wait for the iPhone 12 review embargo to lift later today, more pictures are circulating of the devices in real-world lighting conditions, providing a better look at the different colors available. Leaker DuanRui has shared images on Twitter of the iPhone 12 in white, black, blue, green, and (PRODUCT)RED. The black and white colors are similar to the iPhone 11 colors, but the other...
Read Full Article • 189 comments

Monday October 19, 2020 11:54 am PDT by Juli Clover
Alongside the new iPhone 12 models, Apple introduced a MagSafe charger that attaches to the back of the iPhones using magnets embedded both in the charger and in the iPhone. It allows for speedier charging and paves the way for a portless iPhone in the future. MagSafe chargers are shipping out and are in some Apple retail locations now, and we picked one up to check it out. Subscribe to the ...
Read Full Article • 210 comments

Saturday October 17, 2020 10:10 am PDT by Hartley Charlton
Apple's new MagSafe charger and cases have begun arriving to some customers earlier than expected, and images of the accessories have started to surface on Twitter. The photos provide a first look at the products in real-world use. As of writing, some MagSafe cases are also available for pickup at select Apple Stores in countries like the United States, Canada, and Germany. Filip...
Read Full Article • 499 comments

Tuesday October 20, 2020 10:06 am PDT by Juli Clover
Apple today released iOS and iPadOS 14.1, the first major updates to the iOS and iPadOS 14 operating system updates that were released in September. iOS and iPadOS 14.1 come a week after Apple released the golden master versions of the updates to developers. The iOS 14.1 update can be downloaded for free and it is available on all eligible devices over-the-air in the Settings app. To access...
Read Full Article • 161 comments

Monday October 19, 2020 9:20 am PDT by Joe Rossignol
iPhone XS models and newer feature both a physical SIM slot and a digital eSIM, allowing for a feature known as dual SIM, dual standby. This means you can have two lines of service on one iPhone, which is useful for purchasing data-only plans while traveling abroad or having personal and business lines on a single iPhone. 5G will not be available in Dual SIM mode on the iPhone 12 and iPhone...
Read Full Article • 124 comments