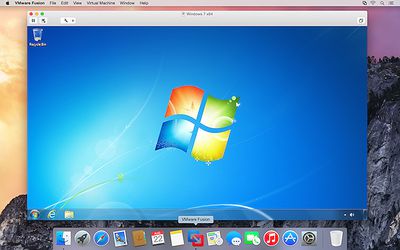 - Near-Native Performance
With a highly optimized 64-bit engine and multicore processing power that makes the most effective use of the latest Intel Haswell processors, Fusion 7 runs Windows and Mac applications side-by-side faster than ever.

Can anyone give me just one reason, why to buy this if you want to run Windows on your Mac? We have Bootcamp and it's free - With VMware you have to pay for both Windows and VMware.

VMware must be slower than running a real install. And it costs you more.


You want to do something totally insane, like not reboot your Mac and run Windows apps right next to your Mac apps.
Score: 19 Votes (Like | Disagree)

I know. But with VMware you have to purchase Windows AND WMware. I still see no reason.

But thx for the answers :-)


When your work requires to use just one application that only runs on Windows, you will see how shelling out $80 (by your boss) is a world changing shift from rebooting every thirty minutes.
Score: 15 Votes (Like | Disagree)

Can anyone give me just one reason, why to buy this if you want to run Windows on your Mac? We have Bootcamp and it's free - With VMware you have to pay for both Windows and VMware.

VMware must be slower than running a real install. And it costs you more.


you can run windows within mac. among other things.
Score: 10 Votes (Like | Disagree)

throttlemeister
Where are all the comments like "annual subscription", "these upgrades should be free", "I will never buy from that company again" like we say in the Parallels thread? There is even less innovation warranting the upgrade prices in Fusion 7 than there is in Parallels 10.
Score: 8 Votes (Like | Disagree)

yjchua95
VMware's usage of Windows 7 in their promo shots really highlights the fact that Windows 8.1 still isn't as good as 7 :D
Score: 8 Votes (Like | Disagree)


All that being said - if you NEED to run Windows on a Mac - or a PC that is supposed to run Linux as its main operating system - you have chosen the wrong main platform for your daily work. You should have stayed with Windows, period.


I NEED to run windows on a mac (visual studio), but I also NEED to run xcode. I don't want 2 machines, and I want to easily share data between the 2 platforms.

There are use cases for parallels/vmware, otherwise why would people buy it (Also its a lot cheaper in hardware cost and support/backups/restore time to have a couple of virtual machines on one set of hardware, regardless of what operating systems are actually in play).
Score: 7 Votes (Like | Disagree)
Read All Comments