Apple's newly refreshed Retina MacBook Pros, released this morning, have already begun showing up in Geekbench benchmarks, offering a look at the performance boost of the updated machines compared to their predecessors. 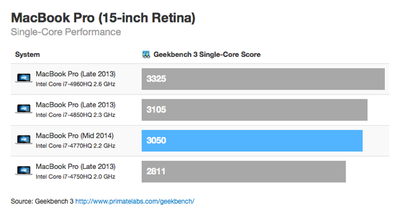 As noted by John Poole of Primate Labs, with the newly refreshed Haswell Retina MacBook Pros, customers are receiving mid-level performance at an entry-level price.

Though the update brings some decent gains to Apple's Retina MacBook Pro lineup, the new Haswell processors are largely a stopgap measure designed to hold customers over until Intel's more powerful and more efficient Broadwell chips are available next year.

slicecom
Wake me up when they update the graphics card.
Score: 19 Votes (Like | Disagree)

Michael Goff
A new faster processor is scoring better than a slower one? STOP THE PRESSES!
Score: 11 Votes (Like | Disagree)

SoAnyway
What's the point of benchmarking a 200Mgz speed increase these days? :rolleyes:

Lesser Evets
When will I stop expecting more?
Score: 8 Votes (Like | Disagree)

SpinThis!
I always feel like buying a new computer is a like jumping on a moving trainat some point you just gotta do it or wait for another one to come around.

As an upside, small upgrades like this aren't bad because completely new generations of products tend to be more buggy. After a couple iterations and speed bumps or revisions it's pretty sold.

It's not like we're transitioning from PPC to Intel again. Anything you buy will have at least 3 years worth of productivity if not 5 or more.
Score: 6 Votes (Like | Disagree)

mohdamerul
only Apple can do this.