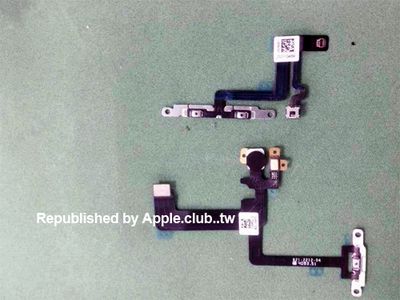 iPhone 6 volume/mute flex cable on top, power button flex cable on bottom
Like the earlier cables, the flex cables in the new images resemble parts from other devices and have an Apple-style part number.

As it is difficult to determine size based on images, it is unclear which set of leaked flex cables might be designed for the 4.7-inch iPhone and which is destined for the 5.5-inch iPhone, but as both cables are different than existing parts for the iPhone 5s, iPad Air, and iPad mini, they point towards two separate devices if legitimate.

Apple.club.tw has also shared images of a longer flex cable with an unknown purpose and a set of SIM card trays in a cobalt blue color. Blue is not expected to be a color for the iPhone 6, as current rumors have pointed towards a release in the existing silver, gold, and space gray for both models, so the blue SIM trays are somewhat questionable.

As we move closer to the September launch date of the iPhone 6, we expect part leaks to become more frequent. We may also see more parts designed for the larger iPhone 6 as it is expected to enter mass production in August or September. The 4.7-inch iPhone is said to have entered mass production in July.

Rumors have suggested that Apple may ship the 4.7-inch iPhone 6 ahead of the 5.5-inch iPhone 6 due to supply constraints with the latter, so it remains unclear if we will see the bigger phone at Apple's prospective iPhone 6 launch event in September.

Don't believe it or any others here until you see it on release day.


Oh my, RUMORS on MacRUMORS.

Don't believe it or any others here until you see it on release day.


...or you could head over to this site:

I don' know how I would feel about blue.


I don't mind getting blew once in a while.
Score: 4 Votes (Like | Disagree)

The Barron
Bring on the Blue.

I don' know how I would feel about blue.

The Barron
It's just that.

Rumors have suggested that Apple may ...

Don't believe it or any others here until you see it on release day.
Score: 4 Votes (Like | Disagree)
Read All Comments

Wednesday August 17, 2022 9:51 am PDT by Juli Clover
Apple is aiming to hold its first fall event on Wednesday, September 7, reports Bloomberg's Mark Gurman. The event will focus on the iPhone 14 models and the Apple Watch Series 8. The standard iPhone 14 models are expected to get few changes, but the iPhone 14 Pro models will include updated camera technology, the removal of the notch in favor of a pill-shaped and hole-punch cutout, an A16...
Read Full Article • 241 comments