With the introduction of OS X Yosemite, Apple introduced a significant visual change with an iOS 7-like "flat" look and completely redesigned icons. While Apple's icons will see a refresh once Yosemite is released, users will have to wait until third-party companies have updated their icons to match Apple's new design language for OS X icons.

In the meantime, users in this long running MacRumors' forums thread have been designing their own "flat" versions of both Apple and third-party applications, allowing some users to switch out their icons until the real thing is available. Additionally, some users are redesigning Apple's own icons for users who are using Mavericks rather than the Yosemite beta.

iWork, Twitter, Skype and 1Password icons by Arn0
While the icons may not be fully representative of the official icons, they do provide a look into Apple's new icon philosophy enacted upon an icon not designed for it, allowing for a glimpse into various companies' processes.

Alongside stand-alone apps like 1Password, Twitter and Skype, Arn0 also redesigned icons for entire suites of software, like Adobe's Creative Suite. Thread starter Humex has been sharing a number of different examples of flat OS X icons from around the web, including concepts that hew closer to Apple's style than Arn0.

Alternatively, designers like drflash have taken a different approach to flat design. Rather than mimic Apple's philosophy and match OS X Yosemite, they created their own design language with Flat OS, which provides a completely different experience for OS X users. The design seems to marry "flat" design alongside some skeumorphic principles, giving icons a more tangible feel.

Finally, Apple uses Hollywood-style yellow and orange highlights and blue and teal shadows to give the metal-like materials that the icons are made out of feel warm and tangible. This helps create the illusion that the icons are more physical than previous icons while also looking flatter than before.

iRock1
Oh please, don't start giving ideas to Apple. Following this frigging absurd path, it wouldn't surprise me at all if they come out with something like this in a few years: 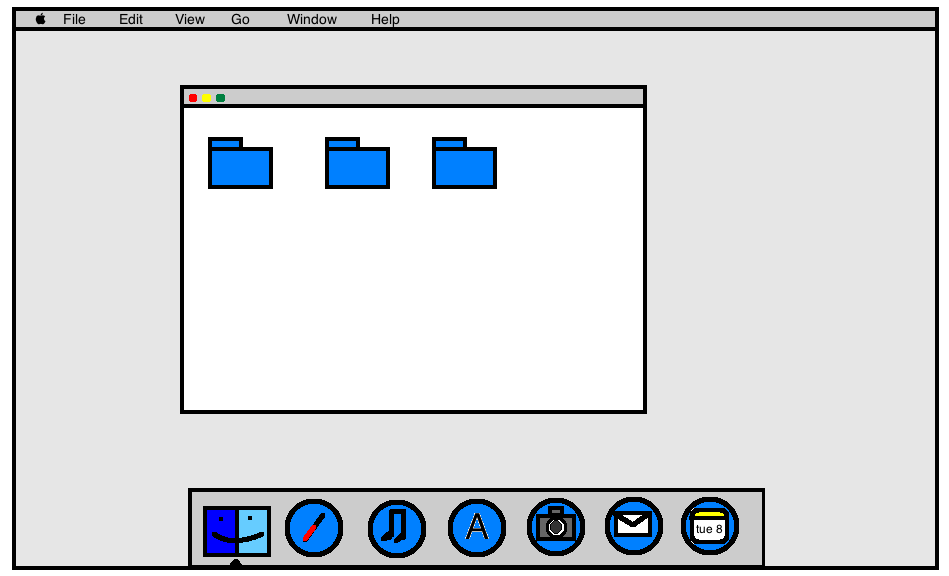 Lapidus
I don't think they ALL should be round..
Score: 21 Votes (Like | Disagree)

QCassidy352
I don't like them at all. I hope people realize that "flat" is not inherently better or a logical step forward, regardless of what Apple says in its keynotes. Its a design choice, just like skeuomorphism, which some people will like and others will not, and which can be taken to an extreme (or not).

IMO, there's a happy medium to be struck between "felt" in Game Center or "ripped edges" in Calendar and this cartoony mess.
Score: 13 Votes (Like | Disagree)
Read All Comments