Microsoft today announced several changes to its OneDrive cloud storage services, starting with a massive increase to 1 TB of storage for all Office 365 subscription plans. This expanded storage will be will be automatically added to existing Home, Personal, University or Business subscribers starting in July. While the 1TB feature is new for Home, Personal, and University users, this upgrade previously was announced for Office 365 Business subscribers. 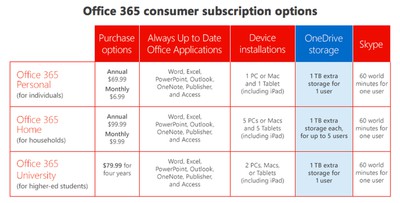 Today, OneDrive and Office are announcing a BIG change to that benefit for consumers, to the tune of 1 TB per user. That’s right–we’re increasing the OneDrive storage allotment included with Office 365 Home, Office 365 Personal, and Office 365 University from 20 GB to 1 TB. That’s a whopping 50 times, or 5,000 percent increase in storage–and it’s going to be here before classes are in session!

For OneDrive users who are not Office 365 subscribers, Microsoft has also sweetened the deal by boosting the free storage allotment from 7 GB to 15 GB. Prices for additional storage plans also are being slashed by 70 percent, with new monthly prices starting at $1.99 for 100 GB (previously $7.49) and $3.99 for 200 GB (previously $11.49).

This Cloud storage expansion is one of several recent initiatives that encourage consumers to use Microsoft's Office platform. Earlier this year, Microsoft brought its Office suite to the iPad with tablet-friendly versions of Word, Excel, and PowerPoint. The Redmond company also introduced a new Personal Office 365 subscription plan for individuals and a Home plan for families that complement its multi-user business subscriptions.

Apple is of course also expanding its cloud storage services alongside iOS 8 and OS X Yosemite with the launch of iCloud Drive. Apple has yet to announce full details on iCloud Drive pricing, but at a minimum it includes options at 5 GB for free, 20 GB for $0.99/month, and 200 GB for $3.99/month, with higher tiers also available.

Time for Apple to up the base 5GB.

Either way, it's a win win for consumers and the NSA.
Score: 23 Votes (Like | Disagree)

avanpelt
I hope Apple re-examines the landscape between now and the release of iOS 8 and adjusts their iCloud storage offerings accordingly.

5 GB for free has always been laughable and will only become more laughable as time goes on. They need to at least give you the amount of space of each of your iOS devices in iCloud storage for free. 32 GB iPhone and 64 GB iPad on your Apple account should get you 96 GB of iCloud storage for free. Then, they should offer additional storage in 100 GB increments for $10.00 per 100 GB per year. Easy pricing structure and they still make more money than Microsoft on cloud storage.

Apple can play the huge profit margin game when it comes to hardware and I'll gladly pay the "Apple Tax" because I believe they make the best hardware on the market. However, storage and bandwidth are not high-priced commodities any longer. If I can get 1 TB with Microsoft for $70 a year, I would hope Apple would try to complete with that in some way.
Score: 19 Votes (Like | Disagree)

It's a nice gimmick but I'm still sticking with iCloud all the way. It just works. OneDrive has too many issues for me and their privacy and terms and conditions are insane.

flash84x
I was shocked when Apple didn't announce an increase in the 5GB free tier at WWDC.

One of the biggest complaints I hear from iPhone users is that they constantly are getting messages that their iCloud storage is full.

At the very least I expected they would say the camera roll is unlimited, if Flickr can offer 1TB of free storage, you can do better than 5GB Apple. I'll pay for the 200GB tier myself, but I am sick of explaining to people not willing to pay the extra fee that they need to jump through hoops to free up storage so their backup can run.
Score: 13 Votes (Like | Disagree)

It's a nice gimmick but I'm still sticking with iCloud all the way. It just works. OneDrive has too many issues for me and their privacy and terms and conditions are insane.

1 TB, a "Gimmick"? I have iCloud, DropBox, and OneDrive accounts. They all do their own thing very well. My iCloud is mostly for backing up all our devices. OneDrive is great for easily syncing Office and other documents through my Win8 machines and myriad of iOS devices. DropBox does some inter app syncing well (Datavault). They all "just work" very well on iOS devices. Why limit yourself? As far as terms and conditions, they all have those and anything I _really_ care about or is super sensitive is backed up at work/home and never sees a cloud drive, unless it is encrypted and duplicated at home base. So don't really care about those.

Between Office for iOS and this nice bump in storage, I gotta give MS an atta-boy here.
Score: 10 Votes (Like | Disagree)
Read All Comments

Friday July 30, 2021 9:04 am PDT by Sami Fathi
Tesla CEO Elon Musk reportedly once demanded that he be made Apple CEO in a brief discussion of a potential acquisition with Apple's current CEO, Tim Cook. The claim comes in a new book titled "Power Play: Tesla, Elon Musk and the Bet of the Century," as reviewed by The Los Angeles Times. According to the book, during a 2016 phone call between Musk and Cook that touched on the possibility of ...
Read Full Article • 242 comments