iOS 8 Offers Quick Access to Apps Based on Location

Apple outlined several of iOS 8's major features during yesterday's WWDC keynote, but with the operating system now in the hands of developers, details on several lesser known features have been leaking out. 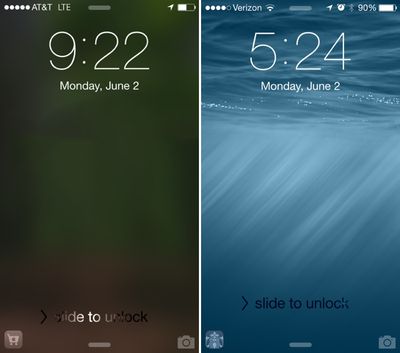 This feature isn't limited to Apple's own stores or to major retailers, either, as one Twitter user has also seen an app for a train station on the lock screen while at that particular location.

Displaying location-based apps on the lock screen is particularly useful at Starbucks and the Apple Store as both locations allow users to make purchases using their iOS devices. In fact, a common theme between the apps that have demonstrated this functionality is a specific on-site function like the ability to make a purchase or display a ticket.

It is not clear how this feature works, or which apps are compatible at this point, but the iOS 8 release notes mention the location based apps as a facet of Location Services. "When Location Services is turned on, the device's current location is used to recommend relevant apps on the lock screen." Based on the description of the feature, it appears to work through both the App Store and physical location and will eventually be able to be turned off by turning off location services for the App Store.

As we approach the public release of iOS 8, it's likely we'll hear more about this new location-based alert feature. iOS 8 is expected to be available to the public in the fall, following a developer-oriented beta testing period.

Update 11:55 PM PT: It appears that Apple will also suggest apps that are not installed when visiting certain locations. For example, a Twitter user who did not have the Costco app installed had a Costco app icon pop up when at local Costco, which took him to the App Store where he could download the app. He was not able to access the rest of the App Store after tapping the icon; only the Costco app was available.

This will suck the life out of that already horrible (as on 7.1) battery.

If you don't like it (for battery reasons or privacy reasons, or any other reasons), you can turn off location services, or carry your phone in a lead case.
Score: 19 Votes (Like | Disagree)

maknik
Is there a way to turn this off without killing location services for the app? I want my apps to be able to access my location only when I say so, not continually in the background. And the last thing on earth I want is for apps to be able to spontaneously advertise their products on my launch screen. Yeech.

(Again, you don't have to agree with me, if you like advertunities. Just give us the option to disable them without crippling the app or the phone with such crude measures as turning off location services altogether.)
Score: 17 Votes (Like | Disagree)

Vinamra
This will suck the life out of that already horrible (as on 7.1) battery.
Score: 16 Votes (Like | Disagree)

shoulin333
This will be awesome for Starbucks! I always hate my phone auto-locking when i am in the drive-through and when I pull my phone out of the cup holder for the girl to scan my barcode. There is a 6 or so step process to get back to that barcode after unlocking.

Step 2) Be prompted to authenticate with TouchID

Yes, I drink way too much expensive coffee.

Yes, I am too lazy to get out of my truck and walk inside.
Score: 13 Votes (Like | Disagree)

Thats awesome! I wish they didn't F up OS X so much though :(

Or savory, depending on where you are!
Score: 10 Votes (Like | Disagree)
Read All Comments

Monday November 28, 2022 10:42 am PST by Juli Clover
Apple has cut back on its Twitter advertising, according to Twitter CEO Elon Musk. In a tweet, Musk said that Apple has "mostly stopped" its Twitter ads, asking if Apple hates "free speech." Musk went on to publish a poll asking if Apple should "publish all censorship actions" taken that impact customers and he began retweeting content from companies that Apple has had moderation discussions ...
Read Full Article • 1336 comments