As a part of today's unveiling for iOS 8 at its Worldwide Developers Conference, Apple announced a new "QuickType" feature for the onboard keyboard which offers context sensitive predictive typing suggestions among other features. 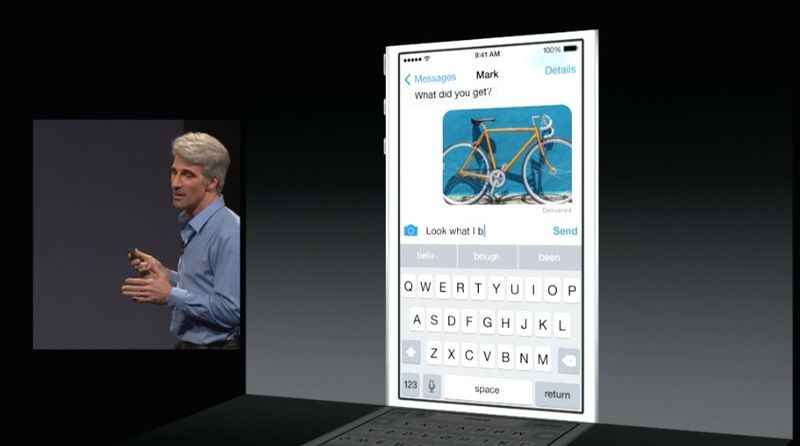 For instance, an example message asking a user about "dinner or a movie" displayed button suggestions like "dinner", "a movie", and "not sure", while the feature will also learn how a user types and suggest specific slang used over time. Apple also promised that QuickType will protect a user's privacy when learning conversations throughout iOS, as the feature will also work in over 10 different languages.

QuickType will ship as as a part of iOS 8, which will be available later this year.

joeyp000
They came through with 3rd party keyboards! :)

joeyp000
This is a welcome change but...

This is a welcome change but...

I was really hoping to see Apple implement a swipe/gesture based option similar to Android keyboards. I'm itching to switch back from an Android device and this kind of feature speeds up performance across every aspect that requires text input.
Rating: 3 Votes

Exactly. I'd rather have swype over this, or both!

Exactly. I'd rather have swype over this, or both!


they allow 3rd party keyboards systemwide now so i am sure someone will implement swype sooner than later
Rating: 2 Votes

kathie63
Like I said, swype keyboard! Hell yes! I will def switch back to iPhone!! (When a bigger screen is available)
Rating: 2 Votes

kdarling
Makes me wonder if Apple waited to implement all this keyboard stuff until after the trials, where Samsung had to pay a ton of money for supposedly infringing Apple's old autocorrect patent.

It would've been a heckuva lot harder to claim damages for something trivial like that, if it could've been pointed out at the time, that Apple themselves had also implemented ideas used by others.
Rating: 1 Votes

This is a welcome change but...

I was really hoping to see Apple implement a swipe/gesture based option similar to Android keyboards. I'm itching to switch back from an Android device and this kind of feature speeds up performance across every aspect that requires text input.

Your prayers have been heard.


That was Swype on the keynote.
Rating: 1 Votes
[ Read All Comments ]