iOS 8 to Include Support for System Wide Third-Party Keyboards 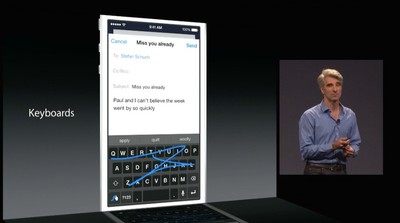 The company showed something that appeared to resemble the popular-gesture based keyboard Swype running on iOS 8, as software chief Craig Federighi noted that keyboards have the most restrictive sandbox to ensure user privacy and safety.

To this point, third-party keyboards such as SwiftKey Note and Flesky have launched for iOS, although their integration has been limited to note-taking in a separate app and allowing app developers to incorporate their keyboard, respectively. With this announcement, it is likely that both keyboards will launch for iOS with full integration at some point in the future.

Support for third-party keyboards will be included with iOS 8, with the new mobile operating system expected to launch this fall.

kdarling
The first third party keyboard I want, is one that actually changes the letter case on the keys depending on shift mode... just like every other software keyboard on the planet.

It's always been insane that, especially after mocking physical keyboards, Apple's own soft keyboard acts like a physical one by staying in uppercase.

(Plus I've lately had to explain to new iPad users why they're not typing what they think. Especially when iOS goes into auto-uppercase at the beginning of a sentence. That's can be very confusing to new iOS users, because while it's nice when you get used to it, it's unexpected, and they try to hit Shift which actually puts in back into lowercase mode.)
Score: 9 Votes (Like | Disagree)

NightFox
Come on! Extensions is MASSIVE - interaction between apps is here! This is SO much more than just third party keyboards!
Score: 6 Votes (Like | Disagree)

The first third party keyboard I want, is one that actually changes the letter case on the keys depending on shift mode... just like every other software keyboard on the planet.

It's always been insane that, especially after mocking physical keyboards, Apple's own soft keyboard acts like a physical one by staying in uppercase.

(Plus I've lately had to explain to new iPad users why they're not typing what they think. Especially when iOS goes into auto-uppercase at the beginning of a sentence. That's can be very confusing to new iOS users, because while it's nice when you get used to it, it's unexpected, and they try to hit Shift which actually puts in back into lowercase mode.)

The worst is when you leave on autocapitalize and you intend to type a key which normally requires you press the shift key (?) but instead it presses the non-shifted variety (.)... so instead you have to press it twice...except not too quickly or it turns into caps lock and still doesn't type the character you wanted. :rolleyes:
Score: 5 Votes (Like | Disagree)

Yes but the difference is google likely won't sure apple over swype.


Google didn't invent Swype typing.....that would be Nuance - at least their app, Swype, was around before Google added it to the default Android keyboard.

Actually, Google took a bunch of 3rd party keyboard ideas and mashed them into the stock keyboard. Don't think there's anything "original" there.

Yet again shows, there's nothing new - its all been done in one form or another. Its the implementation that counts. In this case, Apple opening up to 3rd party devs isn't copying - simply shifting direction. They're also being far more cautious about it it seems with a specific extensions api that allows this type of thing in a highly sandboxed environment.

I was just about to say this. Swype typing is so hard to give up. And if a bigger iphone comes out, they will have me as a customer for life (especially if they figure out the Reminders app bugs)


I'll be all over the Swype keyboard if they release it on iOS. Loved that about my Android phones. Looking forward to it on my iPhones and iPads!
Score: 2 Votes (Like | Disagree)
Read All Comments

Saturday May 30, 2020 4:00 pm PDT by Eric Slivka
Apple today doubled the price for upgrading the RAM on the entry-level 13-inch MacBook Pro, with customers in the United States now being charged $200 to move from 8GB to 16GB compared to the previous $100 upgrade price. Similar increases are seen in other countries, such as moving from €125 to €250 in Germany and from £100 to £200 in the United Kingdom. Current pricing on RAM upgrade for ...
Read Full Article • 281 comments

Thursday May 28, 2020 8:13 am PDT by Eric Slivka
With the release of macOS Catalina 10.15.5 and related security updates for macOS Mojave and High Sierra earlier this week, Apple is making it more difficult for users to ignore available software updates and remain on their current operating system versions. Included in the release notes for macOS Catalina 10.15.5 is the following:- Major new releases of macOS are no longer hidden when...
Read Full Article • 321 comments