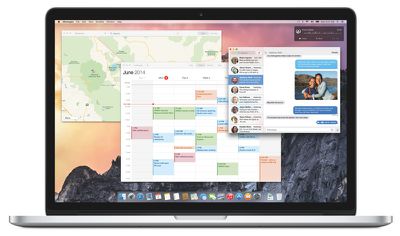 AirDrop finally allows users to share files, photos, and more between iOS devices and Macs. Previously, this feature only allowed files to be shared from Mac to Mac or from iPhone to iPhone, which means sharing files from an iOS device to a Mac will now be far easier. Apple also debuted Handoff, which is a feature that allows iOS devices and Macs to recognize one another, letting users seamlessly transition from one device to another. For example, if a webpage is opened on Safari on a Mac, a user can pick up an iPhone and continue browsing that same site on his iOS device. In a demo on stage, the function was used to show an email started on the Mac continued on an iPhone.

Through Continuity, iPhone communications integration allows users to make and answer phone calls sent to their iPhones right on their Macs. "Green bubble" SMS messages from Android also now show up on Macs, and it's easier than ever for a Mac to connect to an iPhone hotspot.

Design and Notification Center
The new UI is very similar to the flat look of iOS 7 with translucent windows, a new dock and app icons and an all-new notification center with a Today pane and both first- and third-party widgets like Weather and SportsCenter. There's also a new dark mode, which lets users turn the overall interface into the more darkened tone of Notification Center.

Spotlight
Spotlight has a brand new interface which looks somewhat like third-party Mac apps like Alfred and Quicksilver and pops up in the center of the desktop. The new Spotlight allows users to not only search through their computer, but online through sources like Wikipedia, Yelp and for live movie times. In addition, Spotlight can do unit conversions, like converting miles to kilometers.

iCloud Drive
Another significant new feature is iCloud Drive, a Dropbox-like service that syncs documents across Macs, iOS devices and Windows. It offers an iCloud storage folder directly within Finder so users can see exactly which files they have in iCloud and it is accessible from both Macs and iOS devices. Apple has introduced new pricing for iCloud with the debut of iCloud Drive. The first 5GB of iCloud storage is free, while 20GB costs $0.99 per month and 200GB costs $3.99 per month. Tiers of up to 1TB are also available.

Mail
Improvements to the Mail app in Yosemite include Mail Drop and Markup. Mail Drop's intention is to solve the problem of sending attachments that are far too large and result in failed sendings. iCloud now encrypts the attachments and sends the recipient a link to the attachment if it's too large. Attachments are limited to 5 GB. Markup allows users to sketch and doodle on emails, much like Evernote's Skitch.

OS X Yosemite is available today to registered developers and will be launched to the public this fall. There will also be an public open beta program launched later this summer. OS X Yosemite will be a free upgrade for all users.

sshhoott
Continuity is a new direction for the unification of all the Apple devices. Allowing each device to do more of what the other does while also being itself. It's unification done right.

New look is good too.

I just don't think that the mentioning Microsoft and Android was necessary. I prefer it better when Apple just ignores the competition on their live events.
Score: 26 Votes (Like | Disagree)

cleirac
So happy it is fantastic and most importantly, it will be free.
Score: 12 Votes (Like | Disagree)

Porco
I don't really like the new UI look that much, but it's not quite as bad as I feared it might be. It's all been downhill since Leopard anyway IMHO, the skeuomorphic design was certainly getting ridiculous, but they've gone to the other extreme now, hopefully (for my tastes) it will all balance out eventually. YMMV of course.
Score: 11 Votes (Like | Disagree)
Read All Comments