A new screenshot shared by The Trichordist (via The Guardian) allegedly reveals that the Beats Music service had only about 111,000 subscriber accounts during the month of March, indicating that Apple is indeed likely to be purchasing Beats for some combination of its headphones business, streaming technology, brand, and industry connections rather than the existing subscription service.

An acquisition by Apple would undoubtedly boost exposure for the Beats Music service, and potential tie-ins with Apple's existing iTunes services would offer a strong platform for growth, meaning that Apple is likely relatively unconcerned with the small subscriber base. 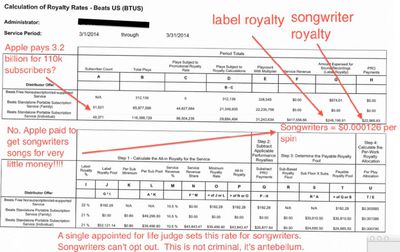 The leaked royalty sheet breaks down the subscriber numbers according to the available plans, and of the roughly 111,000 accounts, just under 50,000 were individual accounts while 61,621 were joint "family" accounts available through a promotional arrangement with AT&T. Beats Music has not released subscriber numbers, but this leaked sheet appears to corroborate an earlier report from Billboard that claims Beats' early subscriber estimates have been "disappointing" to music label executives.

Apple had reportedly been impressed with the subscription conversion rate for Beats, although it is not entirely clear from the chart where those users are accounted for. Roughly 70% of total plays fall under a "promotional royalty rate" category, with the remaining being subject to standard royalty calculations, although it is unclear what criteria cause a play to be placed in either of the two categories.

Looking at the individual subscriptions, the numbers show that Beats pays out approximately 65% of its revenue to rightsholders, similar to other streaming services, with labels receiving by far the largest chunk and songwriters receiving only a tiny slice through their performance rights organizations (PROs).

Apple is reportedly acquiring Beats Electronics for music industry veteran Jimmy Iovine and musician Dr. Dre, both of whom may play a crucial role in Apple's future music strategy. The Cupertino company also will receive a high-margin headphone business that could be help Apple attract a wealthier and younger clientele.

Nunyabinez
I'm sorry now that I complained when there were all those Angela Ahrents stories pummeling me.
Score: 26 Votes (Like | Disagree)

HurtinMinorKey
You don't pay $3.2B for two dudes. Drop the pretense.

i make movies
For those who care:

Apple did it to acquire the brand... Apple has a LOT of users that will buy that brand.. :D

Guess you're correct. Anybody willing to buy a IPhone 5C, iPhone 4 in India, Mac computer, $20 USB cable, $400 iPad 2 or $400 iPad mini is gullible enough to buy Beats headphones with a Apple logo on the side.
Score: 10 Votes (Like | Disagree)

jamesryanbell
I'm a full-time musician/songwriter. Streaming has absolutely killed music. One ten-thousandth of a cent per spin doesn't pay the bills. Music should be regarded as something with intrinsic value. If this keeps up, music will get even worse than it already is today...because the time people spend on pouring into their art will go down. Sure, there's a small percentage of musicians that will do it anyway, but think of all the good music that would never be, simply because talented artists *can't afford* to spend as much time as they need on their art?

So much music that could've been will be lost. What a shame.
Score: 9 Votes (Like | Disagree)
Read All Comments