Before the introduction of Google Docs and Google Sheets, documents were only accessible via Google Drive or the web. Google is also planning to release a Google Slides app in the near future, further growing its line of productivity apps on the iPad and the iPhone. 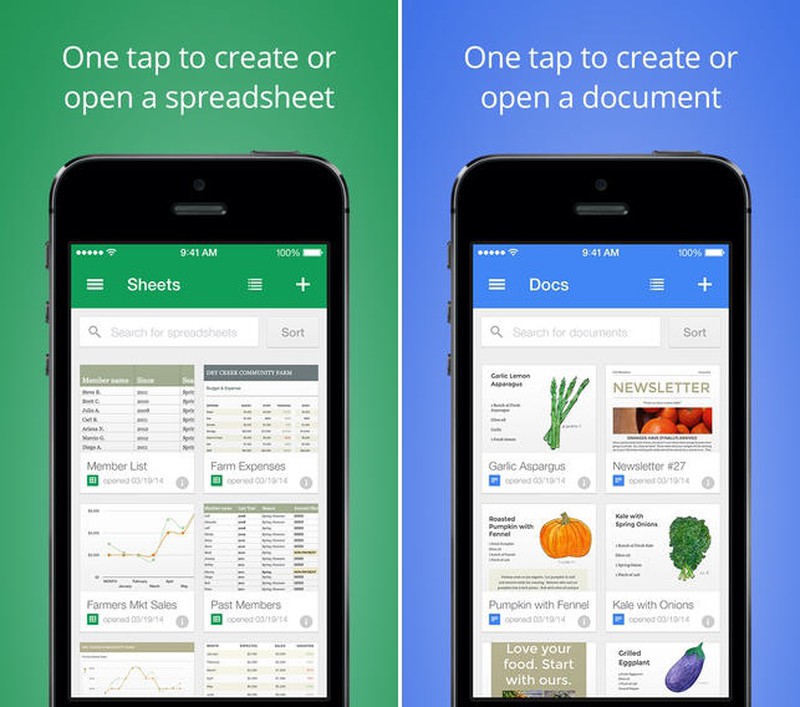 The apps are designed with offline support built in, so viewing, editing, and creating files can be done without an Internet connection. Google Docs supports opening and editing documents that have been previously worked on via another device and documents can be shared and edited by multiple users at the same time.

With Google Docs you can:

- Create new documents or open and edit any that you started on the web or another device.
- Share documents and work together with others in the same document at the same time
- Get stuff done anytime–even without an internet connection
- Add and respond to comments
- Never worry about losing your work–everything is automatically saved as you type

Google Sheets functions similarly, allowing multiple users to work on documents in the app or on the web. The app supports formatting of cells, sorting data, and more.

With Google Sheets you can:

- Create new spreadsheets or open and edit any that you started on the web or another device.
- Share spreadsheets and work together with others in the same spreadsheet at the same time
- Get stuff done anytime–even without an internet connection
- Format cells, enter/sort data, perform various sheet operations, and more
- Never worry about losing your work–everything is automatically saved as you type

Both of Google’s new apps can be downloaded from the App Store at no cost.

Lapidus
In a few years, I guess this will be the popularity order:
Google > Apple > Microsoft
Score: 7 Votes (Like | Disagree)

Again with the horrible, fake 3D bevel on the app icon. Luckily I have no intention of using these apps.

Luckily something inconsequential like that has no effect on the functionality/usefulness of an app.
Score: 5 Votes (Like | Disagree)

There are two things that matter in picking an office suite:
1 - How easy is collaboration?
2 - How capable is the suite of making great looking documents?

For the first category, Google wins, no competition. It's what their claim to fame is and always has been - it's what they've been focused on from day one. Without that, the entire world would have scoffed, shoved it aside, and kept using Office. iWork is better than Office in this category, but the synchronization is quite buggy when multiple people are editing a single document - it'll regularly see simultaneous edits as being mutually exclusive, even though they have nothing to do with each other, and thus force you to pick one edit or the other, not both.

For the second category, Apple and Microsoft's suites are about as capable of each other. The major difference is that with Apple, it's incredibly easy whereas I have to search through help manuals on a regular basis to make even trivial style changes in Office. Google is in an extremely distant last place in this category. It's okay for presentations (although even then, it's far inferior to PowerPoint and Keynote) but I'd never seriously consider making anything more than a trivial spreadsheet in it or a short, 1 or 2 page list just for internal usage, in the word editor.

Apple is poised to have inarguably the best software - they just need to fix synchronization issues in collaboration.

Oh, and you guys may not realize it, but IBM still makes Lotus. I had always assumed that died when Microsoft made Office, but I was wrong. It's easily the worst productivity suite in existence, but IBM requires all IBM employees to use it.


Aren't you forgetting a third major category? Feature set? Don't get me wrong, I use iWork exclusively as the CFO of a small company, and have basically enforced this on our workforce in an all Mac work environment. Excel has been basically relegated to a glorified calculator and used for legacy files from before our switch, but there are still some things it is better at. (tools for analysis of large sets of data, like pivot tables, as the major example)

iWork is definitely king when it comes to easily making attractive, easy to understand documents and presentations. Keynote is in a league by itself, Numbers is far more attractive and easier to integrate with Keynote than the Excel/Powerpoint combination, and Pages produces equally more attractive end products than Word ever will.

Futurix
I don't get the purpose of the new apps - no new editing features compared to Google Drive app (still no editing for tables embedded inside Docs for example) and (unlike Drive) both apps don't show folders, just one long list of all documents filtered by type. What's the point? To give Google more icons? :confused:
Score: 3 Votes (Like | Disagree)

But what about PowerPoint?

In the old days, if you wanted to use productivity software, there was basically only one option......shrink wrapped MS Office. Even if your needs were very simple, you were still pretty much forced into it. But now there are viable options for people with simpler needs. Even at work, 90% of my colleagues only use a small fraction of MS Office functionality and features......for most people it is overkill.

This free offering from Google, combined with Apple's iWorks, is one more step along the path to folks migrating away from MS Office. The subscription prices will likely follow downward as well.

Only time will tell.
Score: 2 Votes (Like | Disagree)
Read All Comments

Tuesday May 26, 2020 2:31 am PDT by Tim Hardwick
Apple will use a Lightning port instead of USB-C in the upcoming "iPhone 12," but it will be the last major series of Apple's flagship phones to do so, with models set to combine wireless charging and a port-less Smart Connector system for data transfer and syncing in the iPhone "13 series" next year. The above claim comes from occasional Apple leaker and Twitter user "Fudge" (@choco_bit),...
Read Full Article • 372 comments