Carousel is a standalone app that is designed to organize a user's entire collection of photos stored via Dropbox, separating them into an event-based timeline that also highlights important moments and supports private messages. Photos automatically backup to Dropbox and sync across all platforms. They can also be shared in batches with and saved to other users' timelines via email or phone number, regardless of whether or not the user has a Dropbox account. 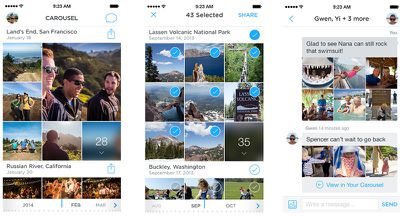 According to Dropbox, the app, deemed "one place for all your memories" backs up photos to Dropbox, with storage being tied to the amount of space in a user's Dropbox account.

We'd like you to meet Carousel: a gallery for all the photos and videos from your life. It combines the photos in your Dropbox with the photos on your phone, and automatically backs up new ones as you take them. Carousel sorts all these memories by event so you can easily travel back in time to any photo from any date. And unlike other mobile galleries, the size of your Carousel isn't constrained by the space on your phone, which means you can finally have your entire life's memories in one place.

While Dropbox already allows automatic camera uploads and image storage, photos are generally dumped into a single folder that doesn't offer many organizational options. Carousel will bring a whole new photo viewing and sharing experience that will make it much easier for users to browse through their image collections. The app will be live later today.


Along with Carousel, Dropbox has also announced plans to bring its popular Mailbox app for iOS to the desktop. There are few details available on the OS X version of the app, but it will likely function similarly to the iOS app, allowing users to "snooze" messages and organize them into lists. There's no prospective launch date on the horizon, but Dropbox is accepting beta signups.

Take Flight
If only Apple would build this functionality into the native Photos app/iCloud. The Photostream crap is confusing. This is how it should work.

A never-ending camera roll that just offloads to the cloud when you need more room on your phone.

They already do it with Music.
Score: 6 Votes (Like | Disagree)

Don't forget the price of handing over more of your data to Google.

Yet another one that thinks Apple, Dropbox, and Microsoft don't mine your data.
Score: 5 Votes (Like | Disagree)

Love DropBox, but Google Drive prices are much better. When it comes to cost per Gigabyte vs different ways to view my images - cost per GB wins.


Don't forget the price of handing over more of your data to Google.
Score: 5 Votes (Like | Disagree)

Razeus
Means not a dang thing if those prices don't get lowered.
Score: 5 Votes (Like | Disagree)

I tried it, but if I'm not mistaken, there were no push notifications for the longest time. That might have changed, but at the time that was the deal breaker for me.

There have been push notifications since release.
Score: 3 Votes (Like | Disagree)

brianvictor7
I prefer to use icloud for photos for now. The free Dropbox space is too precious for other file usage.
Score: 3 Votes (Like | Disagree)
Read All Comments

Thursday September 29, 2022 7:44 am PDT by Juli Clover
The iPhone 14 Pro and Pro Max introduce some major improvements in camera technology, adding a 48-megapixel lens and low-light improvements across all lenses with the new Photonic Engine. We've spent the last week working on an in-depth comparison that pits the new iPhone 14 Pro Max against the prior-generation iPhone 13 Pro Max to see just how much better the iPhone 14 Pro Max can be. Subscrib ...
Read Full Article • 82 comments

Thursday September 29, 2022 12:38 pm PDT by Juli Clover
Tony Blevins, Apple's vice president of procurement, is set to depart the company after he made a crude comment about his profession in a recent TikTok video, reports Bloomberg. Blevins was in a video by TikTok creator Daniel Mac, who was doing a series on the jobs of people he spotted with expensive cars. After seeing Blevins in an expensive Mercedes-Benz SLR McLaren, Mac asked Blevins what ...
Read Full Article • 234 comments