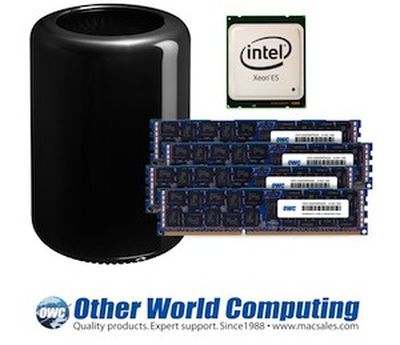 Back in January, OWC confirmed that the 2013 Mac Pro's processor was socketed and removable, theoretically allowing for future upgrades, which are now available by the company. As of today, OWC is allowing users to send in their Mac Pros for both processor and memory upgrades.

Processor upgrades, which start at $1,498 with the trade-in of the base Apple-supplied quad-core processor, include 8-core, 10-core, and 12-core models that are compliant with Apple's technical specifications and power requirements. OWC says that the upgrades are tested, qualified, and guaranteed to meet or exceed the processors available from Apple.

According to the company, the processors are up 46 percent faster than base factory processors available from Apple, and up to 31 percent more affordable.

The company is also offering turnkey installations of its memory upgrades, which as previously announced, are available in 32, 64, 96, and 128 GB kits starting at $449.

OWC's Turnkey Upgrade Program, which is available for processor, memory, and storage upgrades, offers professional installation and testing by Apple Certified technicians, also including shipping both ways and rebates for existing hardware. More information on the program can be found on the Other World Computing upgrade website.

I mean, I guess this is how the 1% live. The Mac Pro is a pretty new and expensive computer already, but you already have people willing to spend $1,500 minimum to upgrade the processors? I just... can't even...


Quite the opposite. This is how those that use their computer to make money spend their money. The opposite being the person that buys a Mac Pro base model just because it's fast, but uses it for email, web, and games.
Score: 21 Votes (Like | Disagree)

BornAgainMac
Apple should just sell the case with nothing and I'll go to this vendor to stock it up.
Score: 10 Votes (Like | Disagree)
Read All Comments