Apple today updated GarageBand for Mac to version 10.0.2, bringing several improvements including the ability to export tracks in MP3 format and three new Drummer options in the $4.99 content pack. 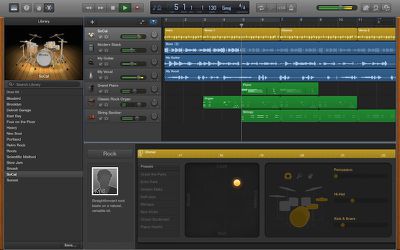 - Improves stability and addresses a number of minor issues
- Adds the option to export songs as an MP3
- Contains multiple enhancements to Accessibility
- Includes 3 new Drummers and drum kits from the rock, songwriter, and R&B genres*

*Part of the one-time in-app purchase that includes the complete set of GarageBand sounds, loops, and drummers, as well as access to the GarageBand Lesson Store.

GarageBand 10 was introduced alongside OS X Mavericks last October and was part of a significant shift in Apple's business model that saw all iLife and iWork apps for iOS and Mac devices become free for customers purchasing new devices. While the basic GarageBand app for Mac is a free download [Mac App Store], additional content such as virtual drummers, lessons, sounds, and loops are part of a $4.99 in-app purchase package due to licensing costs associated with the content.

keysofanxiety
I'm really impressed with GarageBand at the moment. IMHO they've done a great job with the UI, which means it's barely a learning curve from this to Logic Pro X in regards to basic editing. They're giving people the tools to create great things, and it's a really good way to help interest in their Pro applications.
Score: 7 Votes (Like | Disagree)

- Adds the option to export songs as an MP3

I am a drummer. I record my own drums thru mics, so no need to pay for drum sets.

Yes, but the drummers in Garage Band don't drink your beer, hit on your girlfriend, not show up when they are supposed to and can actually keep accurate time.

(Not saying this applies to you, but most of the drummers I've worked with.)
Score: 2 Votes (Like | Disagree)

clintage3
Apple has really rocked the house with GarageBand. It's a pretty fantastic DAW. I've used a lot of them professionally, and the best ones are the ones that let the musician/engineer create without getting bogged down in a learning curve. I'm still a Presonus StudioOne man, but for songwriting, GB has the baton. Also - the Drummer feature makes it a major player in forming drum tracks. I sold my v-drums because I (a non-drummer) got better results from Drummer. So I form my actual drum parts in GB, export them, import into StudioOne and record the rest of my song. No other DAW has a drum track feature that's near as organic and easy to use as GarageBand (Logic Pro X obviously does). BOOYA! Looking forward to the extra drummers.

And to answer someone else's issue with the "in-app purchase" avenue... Apple does the in-app purchase for the extras because of licensing and royalties they have to pay for the loops and samples. That's their way of keeping GarageBand free in the AppStore, but having the option to gain more content. In all honesty, the Drummer alone, if it were a stand-alone plug-in, could easily go for $500.
Score: 2 Votes (Like | Disagree)

So is this a new thing?? Apple removing features, only to introduce them as new features again..


Nah, it's been going on for a number of years. Backlit keyboard removed from MBA, then reintroduced, for one. I'd like to think that Apple react to people's complaints, and if there's enough justification, they'll reintroduce a feature. :D :apple:
Score: 2 Votes (Like | Disagree)

Is this a new marketing strategy of Apple? Dropping basic features and then adding them back in a future version, claiming this to be a terrific update?
(Same thing with calendar synching via iTunes instead of iCloud)...
Score: 2 Votes (Like | Disagree)
Read All Comments