Apple's graphics partner for iOS devices, Imagination Technologies, has announced a new version of its PowerVR graphics architecture that includes ray-tracing capabilities. Apple currently uses the PowerVR G6430 graphics package from Imagination in its latest A7 chip that powers the iPhone 5s, iPad Air, and Retina iPad mini, so Imagination's new technology is likely of interest to Apple. 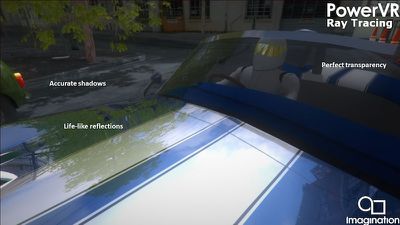 For the better part of the last eight years, we have been busy developing unique hardware and software technologies to radically lower the cost and dramatically increase the efficiency and performance of ray tracing.

This work culminates at GDC 2014 with the official launch of the PowerVR Wizard GPU family, a range of IP processors that offer high-performance ray tracing, graphics and compute in a power envelope suitable for mobile and embedded use cases. This opens up the potential of highly photorealistic, computer generated imagery to a host of new real-time applications and markets not previously possible.

AnandTech has more on the developments, which are an extension of the Series6XT graphics profiled last month, noting that Imagination is combining ray tracing with traditional rasterized graphics.

Comparison of traditional rasterized (top) and hybrid rasterized/ray-traced (bottom) scenes
Alongside the upcoming mobile GPU designs that will support ray tracing, Imagination's expertise in ray tracing will include an impact on game developers in the nearer term with yesterday's unveiling of version 5 of the popular Unity game engine. Unity 5 will leverage Imagination's ray-tracing technology to allow game developers to view lighting changes in near real time, accelerating the development process.

Apple has not been explicitly mentioned as interested in taking advantage of the new Wizard GPU designs, but the company has used Imagination GPUs in all of its iOS devices and is a minority investor in Imagination, holding an approximately 10 percent stake in the company.

As for timing, it seems that Wizard GPUs will not be making their way into products until 2015, indicating that they are not candidates for the iPhone 6, which is expected to debut later this year. Future iPhone models could, however, incorporate Wizard GPUs for more realistic graphics, and it appears that Imagination is banking on this technology becoming the standard for mobile GPUs in the future.

roow110
Am I the only one who prefers the rasterized-only image in the example?
Score: 14 Votes (Like | Disagree)

delnerdo
Think of how it will make a snappier Safari!
Score: 13 Votes (Like | Disagree)

Think of how it will make a snappier Safari!


Every time someone posts this, a kitten gets hit by a car.
Score: 11 Votes (Like | Disagree)

Am I the only one who prefers the rasterized-only image in the example?

spyguy10709
Frankly the iPhone and iPad have the most impressive graphics performance of any mobile device - look at top tier games on the iPhone 5S compared to its counterparts... Not even close.

A bump like this would be killer for anyone who loves gaming on iOS.