Apple today posted an updated security document [PDF] on its iPhone in Business site, offering details on the inner workings of both Touch ID and the "Secure Enclave" built into Apple's A7 processor (via TechCrunch).

Since its 2013 release, Touch ID has faced scrutiny over privacy concerns from both users and government officials, and while Apple has previously offered few details on how Secure Enclave works, it has assured users that the system stores only fingerprint data rather than images. 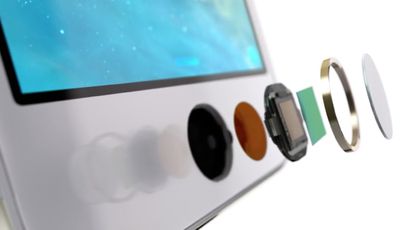 According to the updated security document, Secure Enclave is a coprocessor within the A7 chip that uses a secure boot process to ensure that its separate software is both verified and signed by Apple. All Secure Enclaves can function independently even if a kernel is compromised and each one contains a unique ID inaccessible to other parts of the system and unknown to Apple, preventing the company or any other third parties from accessing data contained within.

Each Secure Enclave is provisioned during fabrication with its own UID (Unique ID) that is not accessible to other parts of the system and is not known to Apple. When the device starts up, an ephemeral key is created, tangled with its UID, and used to encrypt the Secure Enclave's portion of the device's memory space.

Additionally, data that is saved to the file system by the Secure Enclave is encrypted with a key tangled with the UID and an anti-replay counter.

Fingerprint data collected from Touch ID is stored within the Secure Enclave, which is used to determine a match and then enable a purchase. While the A7 processor collects data from the Touch ID sensor, it is unable to read it because it is encrypted and authenticated with a session key built into Touch ID and the Secure Enclave.

It's encrypted and authenticated with a session key that is negotiated using the device's shared key that is built into the Touch ID sensor and the Secure Enclave. The session key exchange uses AES key wrap- ping with both sides providing a random key that establishes the session key and uses AES-CCM transport encryption.

Along with details on the function and security of the Secure Enclave, the document contains details on Touch ID, most of which have been previously published by Apple in other documents and literature on the feature. It also offers some specifics on the security of fingerprint capturing and a reminder that fingerprint data is accessible only to the Secure Enclave and never sent to Apple or backed up to iTunes or iCloud.

The document's section on Touch ID and the Secure Enclave ends with a detailed description of how both Secure Enclave and Touch ID work together to unlock an iPhone 5s, which is well worth a read for users interested in how the technology functions.

Apple's updated security document has been added as part of a larger redesign of the IT section of its iPhone in Business site, which now features a cleaner design with navigation icons at the top of the page.

Klae17
Good timing with the new Samsung S5 Touch-wipe-button. Hey how come no one cares about security when Samsung does it yet when Apple does it we all FLIP?
Score: 34 Votes (Like | Disagree)

taptic
And the new Galaxy S5, in cooperation with Android, immediately sends your fingerprint to Google headquarters! No hassle guaranteed!
Score: 23 Votes (Like | Disagree)

Nunyabinez
I would have preferred that they called it the "Fortress of Solitude" rather than the "Secure Enclave."
Score: 20 Votes (Like | Disagree)


I posted a question concerning obvious Android fanaticism on the Android Police site some months ago. The amount of hate posts received in response to what was a simple and honest question was astounding. Bottom line is that Apple Fanbois are much more civilized and even tempered than are Fandroids, IMHO.
Score: 12 Votes (Like | Disagree)

Good timing with the new Samsung S5 Touch-wipe-button. Hey how come no one cares about security when Samsung does it yet when Apple does it we all FLIP?


Samsung will fix it when Apple shows them how.
Score: 11 Votes (Like | Disagree)

Good timing with the new Samsung S5 Touch-wipe-button. Hey how come no one cares about security when Samsung does it yet when Apple does it we all FLIP?