The first Apple retail location could have opened in the late 70s, according to a new account from distinguished Silicon Valley marketer Regis McKenna (via CNET). During a fireside chat held Thursday at the Computer History Museum, McKenna recalled a 1976 meeting in which he turned down an offer from Apple founders Steve Jobs and Steve Wozniak to market the Apple II.

However, McKenna stated that he eventually decided to assist Apple after a dinner with Jobs where both discussed the future of the company:

Jobs and McKenna had dinner and talked about what the future of Apple could look like, and McKenna signed on. Eventually McKenna drafted an eight-page marketing plan in December 1976. Lo and behold, what was written under "Distribution Channels"? Apple stores.

"I had actually presented this to Apple a couple of times," he said. "I had talked about putting them in different parts of the country. 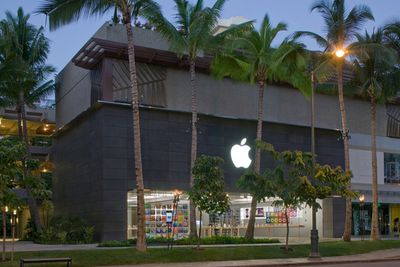 McKenna went on to state that his plan for Apple's retail locations were to have them placed in office parks, and to cater the stores toward high-profile customers. McKenna also added that the locations would have served as centers for corporate sales and training, and that the eventual goal was to shift toward more traditional retail stores for the company, similar to Apple Stores today.

Apple opened its first two retail stores on May 19, 2001 and currently has 420 stores total, with 166 of those located outside of the U.S. During its financial results conference call covering the 2013 holiday quarter, the company reported $7 billion in revenue generated from its stores with 21,000 visitors per store per week, and an average revenue per store of $16.7 million.

The idea for a product based company to have a retail store!? Before the age of online sales? Revolutionary! :rolleyes:

Retail stores dedicated to computers in 1976... Yes, I'd call that revolutionary myself.
Score: 4 Votes (Like | Disagree)

iMacx
The idea for a product based company to have a retail store!? Before the age of online sales? Revolutionary! :rolleyes:
Score: 3 Votes (Like | Disagree)

So, it took Steve Jobs 25 years to bring that to fruition. We all know he is maniacal about perfection, but the time from conception to creation and marketing makes one wonder how that company stayed in business.


Why wouldn't they stay in business? Until then most computers (Macs, PCs, and others) were sold by independent computer stores and electronics chains. The only exceptions I can think of being starting in the late 80's Dell, Northgate and Gateway as mail order only, and Radio Shack which had dedicated computer stores until mid 80's (I'd guess that date). Radio Shack's computer stores (and their major brand Computer City stores) all eventually failed, as did their computer line. The failure of Gateway's attempt to go to dedicated retail stores led many to seriously doubt Apple's retail move -- it led to Gateway's demise as a company. And look at how we all laugh at the Microsoft Store! Somehow I think that if it weren't for all the iPods and later iPhones and iPads the Apple store would be gone as well.

I'm not a big fan of the Apple store, but they do seem well trained. I really didn't like the Byte Shop in the late 70's. They had a real "better than you" attitude. Then the raft of Computer City, CompUSA, and big-box electronics stores with knowledge-free staffs turned me off as well. I pretty much have always avoided these retail stores going instead for hole-in-the-wall parts stores and mail-order.
Score: 2 Votes (Like | Disagree)
Read All Comments