Apple has been awarded a patent by the U.S. Patent and Trademark Office (via AppleInsider) detailing a flat smart dock that would be able to determine the orientation a device is placed in and perform actions such as induction charging, data syncing, diagnostics testing, and more. 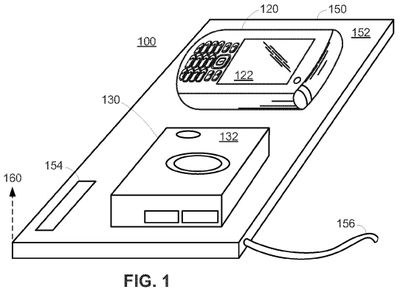 The patent, which was originally filed in 2012, details a dock that includes components such as a processor, memory, internal power supply, and multiple sensors among other components. The dock is described as being a central point in the transfer of data between a user's device and a host device such as a computer. Data itself would transfer between two devices through a wire such as a Lightning cable or through wireless networking.

In terms of identifying different orientations, the patent states that the flat dock would be able to recognize factors including the rotational position and the proximity of a device. For example, if a user leaves a device face down, the dock would perform charging, whereas leaving a device face up would allow for data syncing and charging at the same time. A device on the smart dock would provide on-screen information about the current action being performed as well.

Support for multiple devices on the dock is described in the patent, as the dock would be able to perform actions such as data transfers and charging on devices in close proximity to each other. Transfers between a host device and a primary device placed on the charging surface are also described as a capability of the smart dock.

It is unknown whether Apple plans to create such product or not, but the company has shown strong interest in some of the technologies described in the patent. It was reported earlier this week by The New York Times that Apple was testing induction charging among other methods for its upcoming "iWatch" project. This, coupled with past rumors stating that the iWatch will serve as an accessory to iOS devices would make it a prime candidate to benefit from the functionalities of the smart dock described in the patent.

Apple also filed a patent for a separate smart dock last December, which emphasized voice recognition and single-device use through a regular multi-pin connector. The existence of either device would be of a new effort for the company, as Apple currently sells docks with limited functionality for the iPhone 5c and iPhone 5s. Other accessories such as the iHome family of clock-radios and speaker systems offer a bit more functionality, but very little in the context of deep interaction with a device.

Looks like old tech to me. Induction charging sounds great but what do you do when you are out and about/travelling and want to charge, you still need the cable and brick to do so.

It always sounded great to have induction and data transfer but this is an old patent and i highly doubt any connection to future products now. It's a different way of doing something that is done so cheaply already with very simple cables it makes no sense to reinvent the wheel.


That's why you'll still have a lightning port! Magical eh?

why would I want a slate like shape and cable for inductive charging. can't take it with me when travelling too much hassle imo, not as elegant as the usb cable and charger.


Yes cause they will completely get rid of the lightning port and make you carry this thing around.

Are people getting dumber by the day?
Score: 5 Votes (Like | Disagree)

I remember people posting here that that only recently, that induction charging was stupid and something most people here, who posted on the subject, don't want, and said how rubbish it was as a concept.


So, your conclusion is a reduction in that the introduction of induction will be the opposite of deductive reasoning?
Score: 2 Votes (Like | Disagree)

kdarling
Induction charging on the Palm Pre/Pixi Touchstone power base felt ... luxurious. Perhaps partly because of the way the magnets oriented the phone on a nice slant so you could easily read the display. It also automatically switched to speakerphone mode.

My son-in-law kept bases by his bed, in his car, and at the office.

The people most against something, likely never had it.

It's like someone saying "Why do you need steering wheel controls? The radio is right there. And what if I wanted a passenger to tune it?"

You don't NEED anything. But boy oh boy once you've had it, you hate going without it. And the old method still works as well.
Score: 1 Votes (Like | Disagree)

Tankmaze
why would I want a slate like shape and cable for inductive charging. can't take it with me when travelling too much hassle imo, not as elegant as the usb cable and charger.
Score: 1 Votes (Like | Disagree)

Piggie
No no no no.

I remember people posting here that that only recently, that induction charging was stupid and something most people here, who posted on the subject, don't want, and said how rubbish it was as a concept.
Score: 1 Votes (Like | Disagree)
Read All Comments