Paper is a news reader that obtains content from a user's Facebook News Feed and from well-known online news sites and publications. Like competing apps such as Flipboard and Zite, Paper features a magazine-style layout with individual section categories for content. 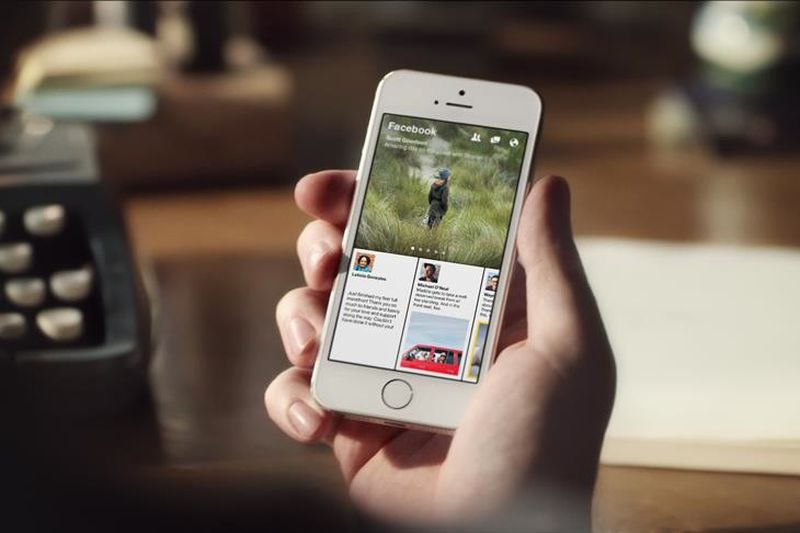 Your Paper is made of stories and themed sections, so you can follow your favorite interests. The first section in Paper is your Facebook News Feed, where you'll enjoy inspiring new designs for photos, videos, and longer written posts. You can customize Paper with a choice of more than a dozen other sections about various themes and topics—from photography and sports to food, science and design. Each section includes a rich mix of content from emerging voices and well-known publications.

Designed to replace the traditional Facebook News Feed, stories within Paper are card-based and can be flipped through by swiping. Content like status updates from friends appears alongside news stories and photos in a simple layout aimed at enhancing readability.

Though newly introduced, Facebook's Paper app shares its name with the popular Paper sketching app from FiftyThree, which has been available in the App Store since 2012.

Earlier today, FiftyThree published an open letter on its website, noting its surprise with Facebook's naming choice. The company asks Facebook to stop using its brand name and to "build a brand name of their own." According to FiftyThree co-founder Georg Petschnigg, who spoke to The New York Times, Facebook has thus far opted to continue with the app launch.

"We have, in writing, asked Facebook to refrain from using the name," Mr. Petschnigg said. "But their response was that they apologized for not letting us know sooner, but as it stands, they are continuing with their launch."

"Paper by FiftyThree" is trademarked in the United States and in several additional countries, which could lead to a legal standoff between FiftyThree and Facebook in the future.

Paper by Facebook can be downloaded from the App Store for free. [Direct Link]

dontwalkhand
Typical dick move from Zuck & Co. They should have known better and it's obvious there's an app out there that exists by this name already.

I hope this project will fail harder than the Facebook phone. I just don't see how anyone would replace the regular Facebook app with this.

Also, get rid of other useless apps like Facebook messenger, as the features are kind of already in the app.

ayale99
Facebook Pages....because the NSA would like a little more info on which news outlets you prefer to read.
Rating: 10 Votes

Second this also. That's why I deleted my Facebook. Can I use this without having a FB account?

petvas
Don't worry, NSA doesn't have to wait for you to use Paper..They already have everything on you..


Paper is still not available in Germany...I hope this app is really better than the standard Facebook app, which just sucks...
Rating: 6 Votes

MiesVanDerRobot
The reality here is that Fifty-Three could have easily created a more broadly defensible trademark, had they been wise enough to use an invented word instead of a common word.

For example, these are broadly-defensible trademarks: Evernote, Zynga, Spotify. Words like Paper are much harder to defend. Likewise, Glympse is very defensible, but Glimpse would not have been.

Meanwhile, 53's new stylus, Pencil, is every bit as weak as Paper was. They may be shooting themselves in the foot, but at least they have great aim: they hit the target every time. :D

It seems like 53 knows this, though. If they believed their trademark was genuinely being infringed they would have responded with a legal notice, not an open letter. This is more of an appeal to common courtesy and/or Google's stated "don't be evil" policy. Essentially their argument is "Gee, guys, you could have been nice about it."

This is night-and-day different from the Candy Crush Saga vs The Banner Saga dust-up. There, you have a case of one side asserting broad ownership of a common English word, and the other side using it in a non-infringing way totally consistent with its standard English meaning.

Here, there's no infringement and nothing to infringe. There's merely an option to be polite, which Google chose to decline. You can decide for yourself if that's "evil" or not, but it's perfectly legal.**

** I am not a lawyer, but I have Joe Pesci on speed dial
Rating: 5 Votes

And facebook will win. Not be being right. But by making the legal fees so large 53 can't afford them and they'll have to pull out. It would be nice if trademarks are actually worth something (ie facebook be stopped from breaking the law) but who knows if this liw will even be enforced as it should be.


Honestly FiftyThree's trademarks are actually for "Paper by FiftyThree" and not just generically "Paper". Legally Facebook are completely in their right to name it what they want to.
Rating: 5 Votes

joeshmo2010
This app is dope. Definitely taking over my use of pulse for news articles. Nice job fb
Rating: 5 Votes

Typical dick move from Zuck & Co. They should have known better and it's obvious there's an app out there that exists by this name already.


There are at least TWO other apps named Paper on the US Store already. So FiftyThree doesn't have much to stand on here. You cannot selectively decide to start enforcing a claim on a mark. And it doesn't look like they registered "paper" by itself anyhow.

Maybe not the best name for it, as i cannot find either the FB or the 53 brand Paper in the app store. I can find these:
Paper - by Contradictory
Paper - by MiSoft
Papers - by mekentosj.com
Rating: 4 Votes

Don't get me wrong, I can see why FiftyThree would be unhappy about Facebook's name choice but he does not own the word paper.


It's not owning a word, it's trademarking within a specific context, which is exactly how trademarks work.

Their trademark doesn't stop any other use of the word, including other product categories. You could use the name Paper for a soft drink, a laundry detergent, a car, whatever...as long as it's not an app. And enforcing it wouldn't set any sort of a precedent, have you not noticed that although they don't own the word, you can't sell a computer and call it "Apple"?

But they likely don't have deep enough pockets to enforce it versus Facebook, they are in the right but even winning a lawsuit would cost way more than they can afford.
Rating: 4 Votes
[ Read All Comments ]