Jobs Biographer Walter Isaacson: 'Execution is What Really Matters,' Apple is the Best

Earlier this month, Walter Isaacson, the man who wrote the best-selling biography of Steve Jobs, garnered some attention when he told a CNBC interviewer that the "greatest innovation today" was coming from Google, not Apple.

Yesterday, Isaacson did an interview with Bloomberg TV, where he clarified his original statement and noted that while he believes Google is the more innovative company, with a clearer integrated strategy, Apple is better than Google at bringing products to fruition. 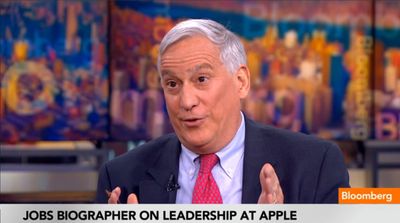 I will say one thing about the comment I made about Google being the most innovative. Innovation is great, but it ain't everything. It's not the whole equation. Execution is what really matters. Apple is the best at execution.

During the interview, Isaacson also commented on the iPhone 5c and Apple's ability to make lower cost products, noting that he believes Apple’s unwavering focus on quality will not allow it to produce subpar products to compete in the low end device market.

I don't think Apple will ever be great at doing low end. It really makes insanely great products to use the phrase Steve used 30 years ago, when he launched the Mac. What I think is going to have to happen is that they're going to have to figure out a whole new set of disruptive products.

You've heard Tim Cook hint about that; whether it's television or a wearable watch, I don't think Apple's going to do well trying to be in the commodity low end race with Samsung and others.

Apple made one of its first attempts into the mid-range market with the 2013 debut of the iPhone 5c, which it sold for $100 less than its flagship iPhone 5s. Apple CEO Tim Cook recently revealed that the launch of the iPhone 5c resulted in some inventory problems for the company, as it had underestimated people's desire for the iPhone 5s.

The company expected a more balanced demand for both phones, which led to iPhone 5s inventory shortages. Due to the lack of demand for the iPhone 5c, it remains unclear if Apple will continue on with both a higher-end and a mid-tier phone for future releases. A recent report from The Wall Street Journal suggested that while Apple will release two phones in the future, it will abandon plastic casings.

As Isaacson suggested, Apple is rumored to be working on several products that have the potential to be "disruptive." The company is said to be close to the launch of a revamped Apple TV product that will incorporate games, which could severely impact the existing console market, and the much-rumored Apple smart watch is also on the horizon.

By the way, writing a book about Einstein doesn't mean that you are smarter than Einstein.
Thus, writing about Steve Job doesn't mean you can be a better CEO.

By the way, posting on an Apple forum about Walter Isaacson doesn't mean you can be a better biographer.........
Score: 15 Votes (Like | Disagree)

By the way, writing a book about Einstein doesn't mean that you are smarter than Einstein.
Thus, writing about Steve Job doesn't mean you can be a better CEO.
Score: 13 Votes (Like | Disagree)

iSRS
With regards to Google and innovation, I can't help but think of the Princess Bride.

With the exception of how to mine data (and they excel at that, and I am not judging them for it), what have they really innovated on? What forward thinking advancement have they really made? On their own, even?
Score: 11 Votes (Like | Disagree)

I can drink to this. The tech world in general isn't turning out very much innovation at the moment, that's coming from what you could say is a tech splinter, video games. But yeah, Cook is a bean counter, everything Apple has done has been evolutionary, even iOS 7 was really just a new set of graphics. I thought it was hilarious when the iPhone 5S's slogan was "Forward thinking" when all it was was a spec bump and finger print scanner.

If you can't think of what 64 bit and Touch ID might mean for the future, then you're not very forward thinking.
Score: 11 Votes (Like | Disagree)

Rogifan
Shut up Walter. Just because you wrote a book on Steve Jobs doesn't make you an expert on the tech industry. :rolleyes:
Score: 10 Votes (Like | Disagree)


Now of late I don't think one can honestly say Apple has been great at execution. Tim Cook, 3 times in his short tenure as CEO, as had to make a public mea culpa because slow product ramp or poor demand calculations caused product contstraints resulting in revenue or sales shortfalls. For someone who's known as being brilliant at supply chain management Cook has been a dullard.

To read these threads, Apple products are behind (smaller screens, no expandable storage, no configurability), Apple doesn't innovate anymore, and Tim Cook is a dullard in execution, particularly as it rlates to supply chain.

And yet, Apple reported record revenue and profits, record sales for iPhone and iPad.

I wish my employer and its CEO could fail and be as disappointing as Apple and Tim Cook are. It would make me a rich man.
Score: 8 Votes (Like | Disagree)
Read All Comments

Saturday February 4, 2023 10:05 am PST by Eric Slivka
Online retailer TigerDirect has slashed pricing on the M1 iPad Air in several colors, offering the base 64GB configuration for just $313.99 in Purple and Pink. Note: MacRumors is an affiliate partner with TigerDirect. When you click a link and make a purchase, we may receive a small payment, which helps us keep the site running. That's a savings of 48% compared to Apple's normal $599.00...
Read Full Article • 495 comments