Apple CEO Tim Cook is currently in Ireland visiting the company's facilities in Cork and preparing to meet with government officials this afternoon, according to a report from TheJournal.ie. The specific reason for Cook's visit is unknown, but Apple has maintained a significant presence in the country for several decades.

The CEO of Apple will be meeting with Taoiseach Enda Kenny later today after addressing staff in the company’s Cork office this morning.

Tim Cook spoke to employees in Apple’s Hollyhill premises about the firm’s future plans. The Taoiseach will take a tour of the facility later today and meet with Cook. 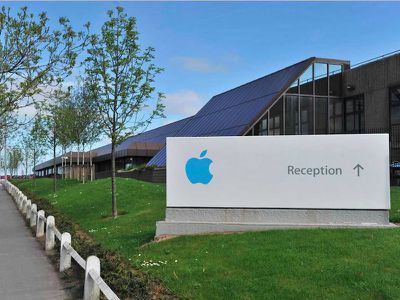 Apple's Hollyhill facilities in Cork, Ireland (Reuters/Michael MacSweeney)
Apple, which has 4,000 employees at its Hollyhill facility, has used its Irish base for decades as its home for operations in Europe and elsewhere, with the company coming under scrutiny last year for its corporate structure funneling revenue through subsidiaries located in the country in order to minimize its tax burden.

Apple has steadily increased its workforce in Cork as the company has grown in recent years, and Cook and Kenny are likely meeting to at least help maintain the long-standing relationship between Apple and Irish officials, perhaps with an eye on the company's future plans.

Earlier this month, Cook traveled to China to help launch sales of the iPhone on China Mobile, the world's largest carrier.

Update: TheJournal.ie has updated its article, quoting Kenny as saying that he and Cook discussed Ireland's participation in EU-wide conversations about clarifying tax issues.

Kenny didn’t say if it was himself or Cook who brought the subject up, but said that the Apple CEO was “exceptionally happy” with the work the Cork office has done.

When asked whether this would mean further investment from the company, Kenny said that it was a matter for Apple to decide, but said that for now, the company is “very happy with the results from Cork and they want that to continue.”


But we all know why here's there

iLondoner
Ireland's government takings are massively inflated by channelling revenues through a country that's in reality a bit of a backwater for Apple. All of the other EU countries are losing out.

Despite being one of Apple's major markets the UK gets practically zilch. :(

I like Apple so not moaning as much as I would about other companies... Google, Starbucks...

ksnell
Nothing wrong with what they are doing. All companies do it. Find me one person that does not try to limit their tax burden as much as possible.

Any complainer can surely pay more taxes themselves if they would like. The IRS won't mind. :D
Score: 3 Votes (Like | Disagree)

This man sure does get around!


Anyone leading a $150 billion company better not be sitting on his butt in an office.

"Apple has maintained a significant presence in the country for several decades."

Erm. Apple was only founded in 1976. That's stretching "several" a little far!


"Several" can be anything more than one.
Score: 2 Votes (Like | Disagree)

prowlmedia
It's insane there is no Apple store in Dublin.
Score: 2 Votes (Like | Disagree)

zen
"Apple has maintained a significant presence in the country for several decades."

Erm. Apple was only founded in 1976. That's stretching "several" a little far!
Score: 2 Votes (Like | Disagree)
Read All Comments