Just a couple of days before the iPhone launches on China Mobile, the world's largest carrier, Apple CEO Tim Cook participated in a media event with China Mobile Chairman Xi Guohua in Beijing, where The Wall Street Journal reports that Cook discussed how "incredibly optimistic" he is about Apple's new cooperation with the carrier.

"We've gotten to know each other....today is a beginning, and I think there are lots more things our companies can do together in the future," Mr. Cook said.

The immediate future, according to China Mobile Chairman Xi Guohua, includes "multi-millions" of iPhones already ordered by the carrier's customers. Earlier today, it was reported that Apple's iPhone 5s supplier Foxconn had shipped roughly 1.4 million iPhone 5s units in advance of the phones' launch in China on January 17. 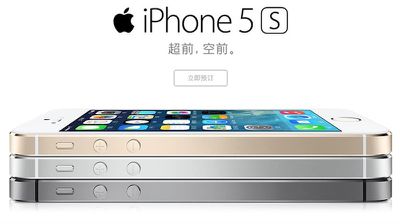 As Cook tells the WSJ, Apple will now be able to sell iPhones in 3,000 more locations, with China Mobile extending Apple's reach to many cities Apple currently doesn't have a presence in. Cook reinforces Apple wants to make the "best products", which means it's unlikely Apple alters its product strategy to make products at lower prices than it currently does.

In the interview, Cook also alluded to future iPhone models and cellular iPads making their way onto China Mobile's network, similar to other carriers around the world.

China Mobile has over 760 million subscribers and is expected to bring many new customers to Apple, significantly increasing the company's presence in China.

Update: The Wall Street Journal has now posted a more complete version of Cook's comments from the Q&A portion of the media briefing.

Update 2: CNBC has video of an interview with Cook and Xi.

chirpie
Is he allowed any other response? :o
Score: 12 Votes (Like | Disagree)

Apple will plateau soon. There is not that many more major markets Apple is not already in, to enter.

I don't know. Seems like Apple is a very expensive player in a market that does not have lots of money.

Ask again in a month and we will know more.


The top 1% of China is very rich.China is sometimes estimated at 1.6 billion people. Consider that that top 1% has children, parents, spouses, and others that are close to them and the major earners of China and their close affiliates is a huge number of people.

The phones will sell and they will sell nicely.
Score: 9 Votes (Like | Disagree)

Tim Cook the beancounter is always "incredibly optimistic" or "extremelly proud" about everything. Does he really think people are so naive as to not see his melodramatic commentary for the corporate-speak marketing BS that it is?


What is he supposed to say?
Score: 7 Votes (Like | Disagree)

Apple will plateau soon. There is not that many more major markets Apple is not already in, to enter.


As with all good news from Apple, it is very clear that:

2. Steve would never have allowed this to happen.
Score: 5 Votes (Like | Disagree)
Read All Comments