Research firm Kantar Worldpanel has released a new report (via The Next Web) highlighting global smartphone sales over the October-December period, finding that while Apple's market share dip slightly in key markets, Google's Android devices increased their lead over other platforms during the end of 2013, registering year-over-year growth in various major markets. 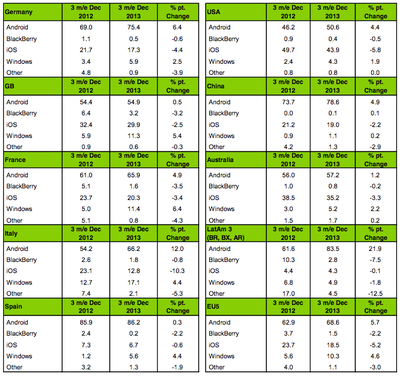 Apple's total market share in the U.S. hit 43.9% in December, and was overall lower in most countries compared to the same timeframe last year. However, Sunnebo stated himself in Kantar's prior report highlighting global smartphone sales over the August-October period that customers generally react more positively to "full" releases than incremental improvements such as the iPhone 5s and the iPhone 5c, which is the likely reason for the drop in market share.

Apple also continues to have strong presence in Japan, as the iPhone has held a steady market share in the months after the debut of the iPhone on the country's largest carrier, NTT DoCoMo:

In Japan, consumers’ desire for all things Apple continued into the final quarter of 2013, with iOS taking 68.7% share of smartphone sales. Apple’s deal to sell iPhones through Japan’s largest carrier, NTT DoCoMO, has proved an unarguable success with Apple’s share on the carrier reaching 58.1% in the fourth quarter compared with 91.7% on Softbank and 63.7% on AU KDDI.

Despite its strong market share in various countries, the iPhone continues to face challenges in mainland Europe and China, where Android's market share is around 70% or higher in many countries. Microsoft's Windows Phone also continues to show growth in many markets, as the platform's market share has even overtaken that of iOS in Italy.

Any source for this or it is just made up?


Have you ever tried to use an Android device these day's without Google's Apps -- it's pretty much a brick otherwise.

Maybe 'steal' is the wrong word maybe not..

The list goes on and on -- they have been caught many times trying to get around and get information they shouldn't be. Unless you run a rooted Android phone without any of Google's apps some of you're information will eventually get gathered and analysed, their entire business relies on nothing less than connecting the dots between your connected history to serve more targeted ads.
Score: 13 Votes (Like | Disagree)

Zwopple
Marketshare shows little value these days, both platforms exist and will exist for many many many years to come.

Things we can guarantee on in the next 5 years at least:

Look, I am a much of an Apple loyalist as they come, but hard to see the correlation between "Holds Strong" and losses in every country.

What I would like to know, what is going on with Windows phone in Europe? Nice job MS!
Score: 12 Votes (Like | Disagree)

Cali Fornia
That headline is a bit too optimistic for my taste.
Score: 12 Votes (Like | Disagree)

Oletros
It seems that Windows Phone is starting to be a real contender
Score: 11 Votes (Like | Disagree)

But by the same token Apple has to do a better job at designing/selling their products. The numbers are not lying, other competitors are nipping at their feet.


I'd be tempted to disagree. Comparing iOS and Android is like comparing OS X and Windows. Windows is an operating system that will be installed on thousands of manufacturers' computers. Same with Android. It'll always have the advantage of market share.

There's no profit in marketshare.

It's only time to worry when a certain Android phone is outselling the iPhone. But as the iPhone increases its sales every quarter, and outsells the best selling Android phone by 5 to 1, there's still no reason to worry. People still want iPhones, and as the sales keep increasing it's difficult to spin this as being bad for Apple.
Score: 10 Votes (Like | Disagree)
Read All Comments