Owners of the iPhone 5s, Apple's latest flagship smartphone, are using significantly more data than iPhone 5 owners consumed last year -- twenty percent more, according to a new research report from JDSU (via TechCrunch), in what the writer of the study called an "unprecedented increase" in uplink and downlink data demands.

The report examined data usage in both developed and developing markets, across more than a million mobile device users. iPhone 5s and fourth-generation iPad owners used the most data, with the Android-based HTC Sensation and the Sony Xperia SP coming up closely behind.

Users of the latest iPhone 5s consume more downlink data than any other smartphone users in both markets under study, consuming almost seven times and twenty times as much as the benchmark iPhone 3G users. This is consistent with the trend seen over the past three years where users of the flagship iPhone devices were the most data-hungry smartphone users. As in past years, we are not in a position to directly identify the root causes of this data consumption. 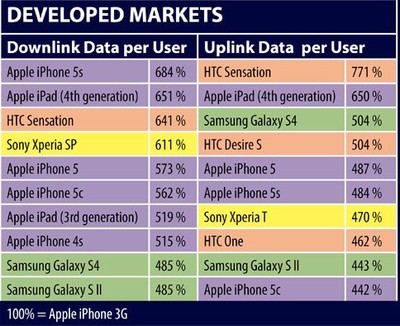 The study also found that iPhone 5c and iPad mini owners used less data than owners of Apple's more expensive devices -- though no easily-determined causal link can be drawn to those findings.

arian19
I like how this entire chart is based off the iPhone 3g
Score: 11 Votes (Like | Disagree)

Just confirms what I have been feeling for a while. iOS seems to use more data for no reason a lot of the time.


actually no the data doesn't confirm anything remotely close to that at all.
Score: 8 Votes (Like | Disagree)

Thank god i have 1Gbps down and no limit as i download a lot of stuff. Last month i've downloaded almost 1.5TB: mostly bluray movies (over 30GB each) and lots of tvshows and lossless music. :)

Yeah, what a great, um, baseline?

Or maybe subjective is the word Im looking for here...


How is it subjective? The baseline doesn't matter all. We still get to compare data usage between phones.
Score: 6 Votes (Like | Disagree)

You know what that means. Apple is sending your fingerprint data to NSA every time you unlock.:p


You beat me to it.:D
Score: 5 Votes (Like | Disagree)
Read All Comments