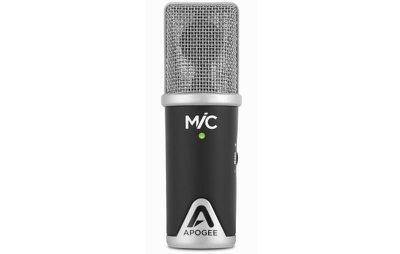 The MiC 96k combines a microphone, preamp, and an analog-to-digital converter in a compact package, which can output 24-bit/96 KHZ audio recording. The product's body includes a steel-mesh housing with a gain control knob and multicolor LED, and a port on the bottom that is compatible with Apple's Lightning and 30-pin connector or a USB interface. Garageband and Logic are compatible with the MiC 96k out of the box, with iOS apps also supported.

Meanwhile, the JAM 96k is compatible with electric, bass, and acoustic guitars accompanied by pickups, and can also yield 24-bit/96 KHZ audio recording. The device also features upgraded sound quality from Apogee's JAM, including tube amp tone emulation, a built in analog-to-digital converter and instrument preamp. The device comes with connection cables for iOS devices and the Mac, and is compatible with Garageband, Logic, and various iOS apps.

The MiC 96k and JAM 96k retail for $229 and $129 respectively, and will be available soon from Apogee's online store.