Popular iOS sports news app theScore has received an update today, adding a new feature focused on personalizing and curating content based on specific sports interests. The app's "MyScore" section now contains a feature named "Feed", which allows users to create their own continuously updated stream of sports news, bringing user-designated information about games, leagues, teams, and players all in one place. 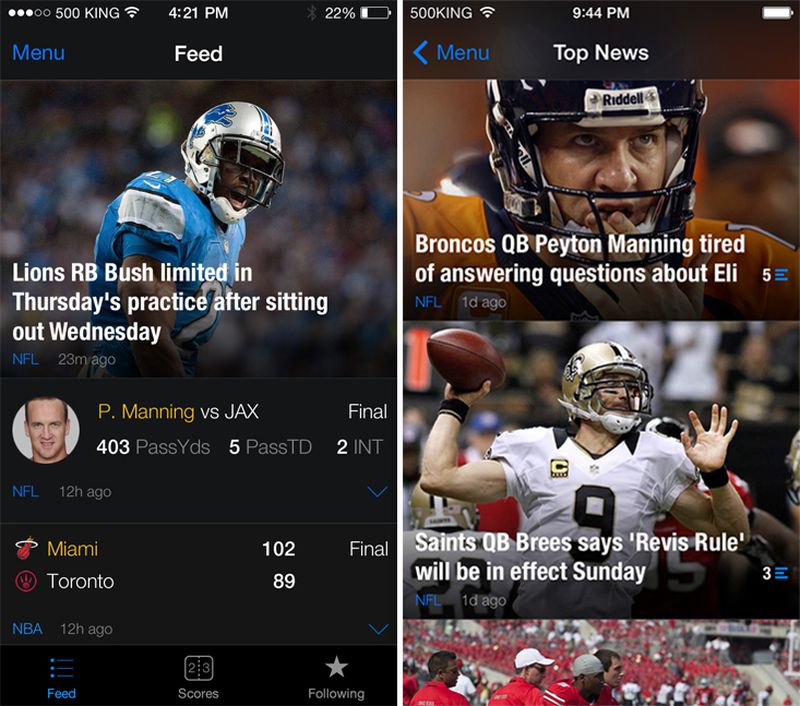 Speaking to MacRumors, theScore's VP of Product Jonathan Savage stated that Feed was developed by observing usage patterns and listening to user feedback, with the feature itself emphasizing a "mobile-first" experience. "We wanted users to have both a comprehensive and highly customizable experience," Savage said, also noting that the player data that can be uploaded into a user's Feed allows for quicker access to stats than individually checking games and can be useful for fantasy sports tracking.

Additionally, Savage discussed how theScore approaches delivering news stories in Feed and throughout the rest of the app, stating that the company has a 35-person newsroom that creates and curates "snackable" content, which involves breaking down the biggest stories into the most important elements and stacking each update to a story on top of the last one.

The app also accompanies league, team, and player news with multimedia content like Tweets and GIFs to provide more perspective on stories. Overall, theScore includes coverage of 23 professional sports, 800 teams, and 15,000 players, all of which can be imported into a user's Feed.

theScore is a free app for iOS devices and can be downloaded through the App Store. [Direct Link]

I really hope this is an app that Rogers doesn't try to mess with. It's better than their Sportsnet app IMO even though they do share features.

Hey there, Kenny from theScore here - thanks for the kind words on the app! We just wanted to let you know that we spun out into a new company: theScore. Inc. and operate independently. Rogers purchased the Television station only. Hope that helps clear that up!

You can read more on that here:
https://thescore.uservoice.com/knowledgebase/articles/215369-weren-t-you-bought-by-rogers-media-
Score: 3 Votes (Like | Disagree)

Hey there, Kenny from theScore here - thanks for the kind words on the app! We just wanted to let you know that we spun out into a new company: theScore. Inc. and operate independently. Rogers purchased the Television station only. Hope that helps clear that up!

You can read more on that here:
https://thescore.uservoice.com/knowledgebase/articles/215369-weren-t-you-bought-by-rogers-media-


Any chance you'll be offering an Ad free version via an In-App purchase?
Score: 2 Votes (Like | Disagree)

Any chance you'll be offering an Ad free version via an In-App purchase?

Hey there, It's definitely something we're considering internally in terms of an Ad-Free version - to be transparent, nothing is forth coming immediately. We do really appreciate the feedback.
Score: 1 Votes (Like | Disagree)
Read All Comments

Friday May 22, 2020 4:01 am PDT by Tim Hardwick
Former Apple executive and iOS chief Scott Forstall made a rare public appearance this week at Code.org's virtual Code Break event, and in between classes, Forstall shared the intriguing story of how he was hired by Steve Jobs. Forstall revealed that he had been considering working at Microsoft when he went to interview at NexT, the company started by Jobs after he had left Apple. Forstall...
Read Full Article • 134 comments