In June, Apple filed a new patent application [PDF] with the European Patent Office describing a system using an in-car accessory with an iOS device to set up geofences to activate various vehicle functions as a user approaches a vehicle.

According to the 15-claim application, which specifically describes "Accessory control with geo-fencing", the accessory (which may or may not be built-in to the car itself) would transmit a signal to a linked mobile device, allowing the device to monitor the location of a vehicle. When the mobile device (and the user) are close enough to the car, the mobile device would transmit a second signal to the accessory within the car, allowing it to trigger functions like door unlocking, defrosting, heating, trunk opening, seat warming, and more. 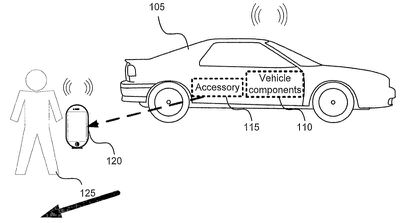 The first signal can identify a current or future location of the vehicle. The mobile phone can generate one or more virtual geofences based at least in part on the location of the vehicle as determined from the first signal. For example, a geofence can be defined as a circular boundary centered on the vehicle's location, the radius being equal to a pre-defined distance. The mobile phone can repeatedly estimate its own location.

Apple notes that geofences can be made in shapes that parallel vehicle components for very specific in-app functions. For example, a geofence could be tied specifically to a trunk or a door, with the mobile device able to identify the absolute-location boundaries of each individual geofence. With such accurate geofencing, a car's trunk could be opened as a user approaches, for groceries or bags to be put away, while the car doors stay locked until later approached.

Geofences can also function on time, with features like a car's heating system able to be activated when a mobile device estimates that an owner is "five minutes away and approaching the vehicle."

Like Apple's iBeacons, which are designed to transmit specific location information to mobile devices, Apple's vehicle accessory system would potentially send signals over Bluetooth LE to activate various functions within the car. Apple suggests Wi-Fi and cellular hardware could also be included in order for the accessory to communicate with mobile devices when owners are located far from their cars.

Along with serving as a possible expansion of the use of Apple's iBeacon technology, the geofencing system described in the patent could also be a future expansion of Apple's iOS in the Car initiative, which is designed to provide enhanced iOS integration in automobiles.

The first hints of iOS in the Car have been bundled into the new 2014 Honda Civic, allowing users to access HondaLink apps for iOS to connect to an iPhone 5 or later. Apple's ultimate goal for iOS in the Car is far more advanced, however, with iOS built-in to in-dash systems.

The patent, which was filed in June and published in November, lists former Apple employee Sylvain Louboutin as an inventor.

Update: The original U.S. patent application from June 2012 has now been published.

69650
I really fail to get excited by all these Apple patents as so few of them ever see the light of day. I don't think anyone should ever be granted a patent until they have actually proved the concept works by actually building and releasing the product. Until that point all patents should be pending. Use it or lose it.
Score: 16 Votes (Like | Disagree)

TimeSquareDesi
this is a car jacking! now gimme your iphone!
Score: 6 Votes (Like | Disagree)

Really this could be all really cool in the long run.
Score: 5 Votes (Like | Disagree)

osx11
Nothing can go wrong here! ;) at least it will be easier for the NSA to see where people are.
Score: 5 Votes (Like | Disagree)

Please find an actual reputable article from 2006 to back up your fictitious 2006 device.

As has been posted here many times, the Open Moko multi-touch design predates the iPhone announcement, even if the final device couldn't afford all that was promised.

There were articles about it on Engadget, Infoworld, LinuxDevices, etc. Gizmodo first had an article (http://gizmodo.com/213016/fics-linux+based-smartphone) about it Nov 7, 2006... two months before the iPhone was shown off by Jobs.

The pictures are often missing from these old web articles, but I saved them:

Of course, few people outside of the industry paid much attention to this, or other multi-touch phone development, until Apple showed theirs. Then reporters remembered, such as in this Jan 2007 Gizmodo follow up article (http://gizmodo.com/229243/openmoko-smartphone-did-they-have-a-time-machine-or-what):

The point is, of course, that oval cases, multi-touch, pinch zoom, icon grid, icon dock, etc were all known design ideas. The Open Moko designers even foretold that "apps would become the new ringtones", referring to that almost billion dollar a year business at the time.
Score: 4 Votes (Like | Disagree)

Concepts aren't patentable. A patent application essentially is an instruction manual on how to invent what they invented. If they had to release it first, then a competitor could invent the same thing and sell it too.


I could invent a flying car with lots of clever diagrams. Doesn't mean it would actually work. You already get a period of time under which your patent application remains secret. So you could use that time to prototype and build the said product or invention before the patent is made public. That would at least stop companies lodging patents for inventions they have no intention of ever using just to stop others from getting there first. Seems a crazy system. If Apple doesn't want to use a patent to make the product then let someone else have it so they can make the product instead. The current system stifles innovation.
Score: 4 Votes (Like | Disagree)
Read All Comments