Apple has been awarded a patent by the U.S. Patent and Trademark Office (via AppleInsider) for a digital camera including a refocusable imaging mode adapter, with the document also discussing the potential use of a similar camera system in a device like the iPhone.

The patent details a camera that is able to be configured to operate in a lower-resolution mode that includes refocusing capability in addition to a high-resolution non-refocusable mode, with the camera's body containing an image mode adaptor to switch between the two.

Also cited in the patent is the plenoptic imaging system used in the Lytro light-field camera, which Apple draws inspiration from but points out that its own microlens array can produce higher-quality images because of a higher spatial resolution. Apple also cites the Lytro's camera system as prior art in the patent. 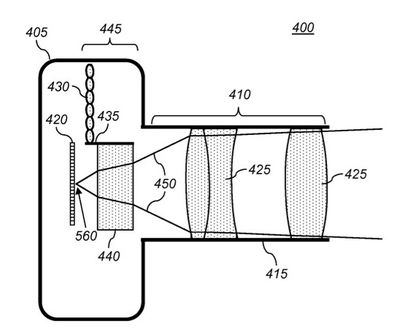 Microlens (440) removed from light path for higher-resolution standard images
Apple's patent outlines how such a lens system could be integrated with a more complete camera solution incorporating image correction and other features, either in a standalone product or within a mobile device.

The Lytro-like technology naturally leads to speculation that it could be used in Apple's rumored standalone point-and-shoot digital camera, which was first rumored in 2012 after Steve Jobs was quoted his biography done by Walter Isaacson stating his desires for the future involved the reinvention of three industries, with one of them being photography. Isaacson's biography also noted that Jobs had met with the CEO of Lytro, although it has been unclear how much direct interest Apple had in Lytro's technology.

This is stupid. Nobody has ever had a need to refocus after the shot, because you can focus when you TAKE the shot in the first place. Also, smartphones small sensors have a huge depth-of-field anyways. You only have shallow/unfocused images in large sensors....

This is what I was getting at. A human user would not likely want to re-focus a shot but a computer might. The computer would do the re-focus in order to gain depth information. With such info it could create a wire frame and a texture map.

Combine this wire frame 3D image with the 3D sensor they reported yesterday can you can drop a real person into a video game.

Today if you tried that with a still image you'd have a "cardboard cut out" dropped into the game. It would look bad. But a real 3D character. People would by that.

You could turn it around backwards too. Take a re-focusable image of a room. Now you can drop a virtual camera into the scene and move the camera around. In a game you could place the chargers in your environment but for way a real-estate sales you can make better presentations because you have the 3D data to allow perspective changes with viewpoint changes.

So YES,I agree, who would want to refocus an image? Answer software would.
Score: 5 Votes (Like | Disagree)

mozumder
This is stupid. Nobody has ever had a need to refocus after the shot, because you can focus when you TAKE the shot in the first place. Also, smartphones small sensors have a huge depth-of-field anyways. You only have shallow/unfocused images in large sensors.

It's a dead end technology.

The most important and useful photography technology that Apple could implement would be to add optical image stabilization. The next would be larger sensors.

Other options would be to allow for interchangeable lenses, and to provide Aperture capability on a mobile device.

A professional photographer has a need to edit and publish photos as quickly as possible. The genius thing about smart phones is that they allow the editing/publishing part to happen in mobile devices in field. The next step would be to implement a higher-quality imaging system (35mm full-frame sensors, various lenses, flash/strobe mounts, other SLR features, etc..)

No need to get silly with light field tech. Just look at what's needed (high-end imaging and rapid publishing) and implement a solution for that.
Score: 4 Votes (Like | Disagree)

Although this is very cool, I would much appreciate a megapixel update on the next iphone if possible apple... even just a little to keep up with the nokia lumia!!


It's not the number of pixels, but the size that counts.
Score: 4 Votes (Like | Disagree)

Although this is very cool, I would much appreciate a megapixel update on the next iphone if possible apple... even just a little to keep up with the nokia lumia!!

good that you're not in charge of Apple. Megapixels are not everything.
Score: 2 Votes (Like | Disagree)

Light field technology is the only way smart phone cameras can continue to shrink in size and increase in quality. Good news.

If the sensor has only so many pixels you can use those pixels in two ways. A light field camera might use 100 sensor pixels per image pixel.

How could Apple use this? The technology makes for a good 3D camera too. I doubt many people will want to re-focus their images but they might want 3D and stereo images with one click. Light field can do that.
Score: 2 Votes (Like | Disagree)

What a stand alone camera?

Now this should be interesting!