In Walter Isaacson's authorized biography of Steve Jobs, the Apple co-founder was quoted as saying that his desires for the future involved the reinvention of three industries: television, textbooks, and photography. With Apple's iBooks Textbooks initiative for the iPad underway and the company reportedly working on television from both hardware and content sides, it has been unclear exactly what Jobs and Apple might have had in the works to address photography. Isaacson's biography did note that Jobs had met with the CEO of Lytro, creators of an innovative new light field camera system, although it is unclear how much direct interest Jobs and Apple had in Lytro's technology.

Earlier this week, iLounge released its comprehensive New iPad Buyers' Guide, an overview of accessories, apps and other information associated with the new iPad. As noted in the announcement about the guide's release, it includes a two-page spread arguing that Apple may be working on a camera product of some sort. According to iLounge, the speculation in the guide is informed by claims from a source, although the information was not considered reliable enough to make concrete assertions at the time.

Take special note of pages 152 and 153—“Making the case for a standalone iSight Camera.” I’ll share more on this topic shortly, but for now, I’ll say that this two-page spread very nearly had a different title. We were tipped that this project is actually happening at Apple right now, but we didn’t feel confident enough in our source to call it a certainty; it’s therefore billed as speculation. Still, there’s enough smoke to make us think there’s a fire. 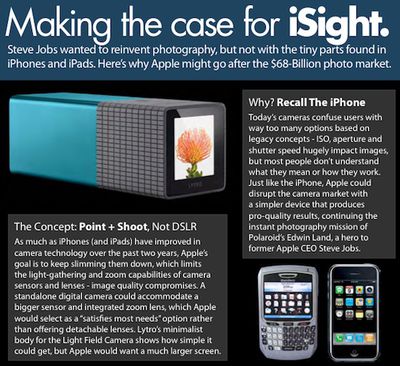 Excerpt from iLounge's New iPad Buyers' Guide speculation on a standalone camera
iLounge now appears to be becoming more confident in its belief that Apple is working on a standalone camera product, with Editor in Chief Jeremy Horwitz issuing a Tweet a short time ago reiterating the claim.

So, as briefly noted on Backstage, Apple appears to be working on a standalone camera - the third of three industries Jobs wanted to change.

While we've assumed that any advances by Apple in photography would most likely come via the iPhone given that many users are abandoning standalone point-and-shoot cameras for increasingly powerful cameras included on their smartphones, iLounge argues that Apple will look to remake the point-and-shoot market with new hardware and software that isn't constrained by the limitations of the iPhone.

As much as iPhones (and iPads) have improved in camera technology over the past two years, Apple’s goal is to keep slimming them down, which limits the light-gathering and zoom capabilities of camera sensors and lenses - image quality compromises. A standalone digital camera could accommodate a bigger sensor and integrated zoom lens, which Apple would select as a “satisfies most needs” option rather than offering detachable lenses. Lytro’s minimalist body for the Light Field Camera shows how simple it could get, but Apple would want a much larger screen.

Apple had a partnership with Kodak in the mid-1990s to produce the QuickTake line of digital cameras, but the product line was discontinued upon Steve Jobs' 1997 return to the company as he sought to streamline Apple's business. The company has of course continued to work on camera technology, in large part with its line of accessory and integrated iSight cameras over the years, but there has been little evidence of an interest in returning to the standalone digital camera business.

It's hard to place much faith in the rumor at this point, and iLounge doesn't expect any Apple camera product to be introduced until after the long-rumored Apple television set makes its debut, but it does make for interesting discussion and we'll keep watching for any other signs of Apple's interest in photography products as time goes on.

Update: iLounge has now published an article outlining the circumstantial evidence for Apple's work on a standalone camera product.

TennisandMusic
I hate the copy in that mockup. "Todays cameras confuse users with way too many options based on legacy concepts."

Is this really what its come to? Don't learn anything? Don't understand how anything works? Start insinuating that a skills based task is actually bad? This is the one mentality Apple has brought to the table that I loathe.
Score: 70 Votes (Like | Disagree)

GoGa
Not going to happen, they'll just make the iPhone camera better. (the 4S already has a camera comparable to most point and shoots.)
Score: 64 Votes (Like | Disagree)

Roessnakhan
While Apple has made an awesome camera in the iPhone 4 and 4S, I can't see them doing a point-and-shoot. People are already swaying away from P&S cameras because of phones like the iPhone.
Score: 41 Votes (Like | Disagree)

basesloaded190
I hope this never happens. Leave the cameras to companies like Nikon and Cannon please.
Score: 21 Votes (Like | Disagree)
Read All Comments