A third Touch ID-related patent application filed by Apple also quietly surfaced last week (via Unwired View) but has flown under the radar until now because it appears to have published on the World Intellectual Property Organization's database but not the U.S. Patent and Trademark Office's database.

This third patent application is the most revealing yet with regard to Touch ID, showing how Apple has envisioned expanding the feature to incorporate trackpad functionalities, tracking movements of a user's finger or thumb over the sensor to navigate through user interfaces on the device's screen. In one example, Apple shows how a user moving his or her finger right to left across the Touch ID home button could pan a map, with a subsequent upward movement across the home button triggering activation of a multitasking interface. 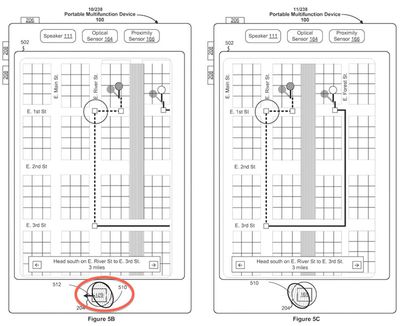 Moving beyond the home button, Apple addresses the possibility of integrating Touch ID right into a device's display, allowing any area of the screen to be dynamically designated as a sensing region for the user's fingerprint. In one example, the area of a display representing the device's email app could require a valid fingerprint touching the icon in order for authorization to be granted.

Authorizing Mail app with Touch ID sensing integrated into device display
Overall, Apple's patent application is a massive 610-page document incorporating 464 claims covering a wide range of applications for Touch ID in the future. Beyond the examples highlighted here, the application covers a number of other areas including:

Such a shame you can't just touch the screen and perform scrolling actions.
Score: 15 Votes (Like | Disagree)

Mannchild
Sometimes, due to my own experience, i almost feel like people are trolling when they say touchID doesn't work well for them. For me, the only time i have to scan my finger more than once for touchID to work is when my finger is moist. I would strongly suggest the people who are having problems scan each finger they want to use twice, if possible, and also make sure you are scanning from different angles when learning it into the device. i have had my device since launch and have never had issues.
Score: 13 Votes (Like | Disagree)

ghettochris
I would like to see it used so if I show someone a picture and they try and swipe left or right they get denied. "you are not authorized to see other photos"
Score: 9 Votes (Like | Disagree)

JKarnsy
I wonder if these will be the icons for iOS 8.
Score: 7 Votes (Like | Disagree)

Call me a troll but other phones do a lot of that today. I even remember my BB800 working like that in 2005.


Read the patent. The patent is for detecting movement of a FINGERPRINT. No phones have ever done this.

Other phones have detected movement of a FINGER, but not a FINGERPRINT. I know, I know, very similar. But it IS different because this is an AUTHORIZED movement instead of a movement of a finger, which does lead to the possibility of innovations in knowing who is moving the finger on the phone.

What it does for Apple, is disallow anyone else from putting a fingerprint scanner and a movement detector in the SAME BUTTON. I understand why this is patentable (something new - nobody has done this before), but it also shows what a silly place patents are in today's world. If Apple would not have patented this, someone else would have, and Apple couldn't do what it wanted to do. Now Samsung comes along and wants to put both on the same button, they can't. They need to use 2 separate buttons.
Score: 6 Votes (Like | Disagree)

Cool idea about requiring a print per app for permission, but it all seems vaguely familiar.

The phone even allowed unlocking a nearby laptop over Bluetooth via the phone's sensor.


Wow if it did all that and did it well why isn't Toshiba ruling the smartphone world today?
Score: 6 Votes (Like | Disagree)
Read All Comments