A pair of patent applications related to Apple's new flagship iPhone feature Touch ID shed some new light on how the fingerprint sensor itself works, as well as the "Secure Enclave" inside the A7 processor that analyzes and stores user fingerprints.

The first, as noticed by Patently Apple, details a method by which the iPhone scans a finger and then provides that data to the "Secure Enclave" for matching and eventual approval.

Rather than storing actual images of fingerprints, Apple takes a fingerprint map and runs it through a sort of encryption to prevent thieves from pulling fingerprint data from a compromised iPhone. The enclave only allows fingerprints to be checked against known valid ones, not the other way around. 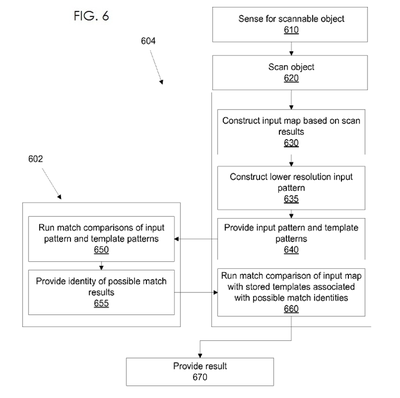 One interesting note about the secure enclave patent is the main inventor, Wayne Westerman. He was one of the lead inventors on the multi-touch technology that Apple eventually purchased and uses as the key feature in Apple's billion-dollar iPhone and iPad lines. Westerman has been a senior engineer at Apple since his company, Fingerworks, was purchased by Apple in 2005.

In a separate application, Apple lays out the different parts that make up the Touch ID fingerprint sensor, including the different bits that Apple shows off in its marketing materials (shown below). Bottom image courtesy Patently Apple.

Touch ID's aesthetic treatments have been included as well, as the patent details "an ink assembly...printed on the lens" that "has the effect that the otherwise-translucent button can be made opaque, so the elements of the fingerprint recognition sensor are not immediately visible to the user."

Neither patent has yet been awarded, with the applications initially filed in March. Provisional applications were filed back in May of 2012, illustrating how long the technology has been in development.

Haters hate but I'm still bummed that they didn't add the tech to the new iPads. :(


With the reports of low yields for the sensors prior to the 5s launch I wasn't suprised.
Score: 7 Votes (Like | Disagree)

WaxedJacket
Haters hate but I'm still bummed that they didn't add the tech to the new iPads. :(
Score: 6 Votes (Like | Disagree)

i.mac
How long before samedung shamefully steals, copies, and claims as their own this invention?
Score: 5 Votes (Like | Disagree)

Those who know less about something tend to think they know it all. They underestimate the complexity and think things can't possibly be this complicated. Yup, this is on the same level as the Motorola Atrix sensor :rolleyes:
Score: 4 Votes (Like | Disagree)

How long before samedung shamefully steals, copies, and claims as their own this invention?

Or maybe they'll just include a powerful enough secure processor, that such a helper hack is not necessary.

Btw, it's really childish when people make up nicknames for companies. It's like putting a giant immaturity mark on your post. Hard to take anyone's opinion seriously after that.

Reminds me of when people used to call Apple "Crapple", or use "M$" for Microsoft, or use "Commode-Door" for Commodore.
Score: 3 Votes (Like | Disagree)
Read All Comments

Thursday September 29, 2022 12:38 pm PDT by Juli Clover
Tony Blevins, Apple's vice president of procurement, is set to depart the company after he made a crude comment about his profession in a recent TikTok video, reports Bloomberg. Blevins was in a video by TikTok creator Daniel Mac, who was doing a series on the jobs of people he spotted with expensive cars. After seeing Blevins in an expensive Mercedes-Benz SLR McLaren, Mac asked Blevins what ...
Read Full Article • 604 comments