LaCie has added a new entry to its Rugged series of portable storage drives, bringing a two terabyte 5400RPM option to its Thunderbolt/USB3 series. 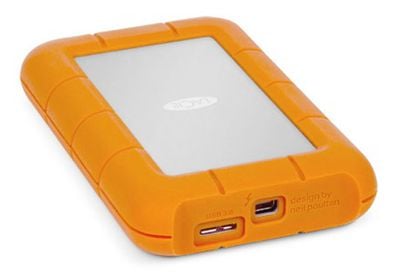 LaCie announced that its award–winning Rugged USB 3.0 Thunderbolt™ Series hard drive is now available in a 2TB version. With double the storage of its predecessor, the new LaCie Rugged is the highest capacity bus–powered storage solution with Thunderbolt technology on the market. Plus, the 2TB model achieves speeds up to 127MB/s, a 15 percent increase from the previous version. With these speeds users can transfer 750 RAW photos or one HD movie in less than one minute.

While the 1 TB launched at $250 last year, the unit is now available from the Apple Online Store for $200 and the new 2TB is available for $300 from LaCie's website.

longofest
Is there a point to Thunderbolt connected to a single 5400 RPM drive?
Score: 20 Votes (Like | Disagree)

What is the point of a single disk Thunderbolt enclosure for $300 when a USB3 one is much less and offers the same performance?
Score: 12 Votes (Like | Disagree)

AngerDanger
With a design like that, it better double as a life preserver. 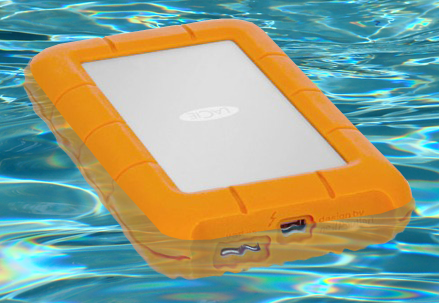 Image (http://www.lacie.com/imgstore/more/Overview_images/RuggedTB_USB3/RuggedTB_USB3_8_EN.jpg)
What is the point of a single disk Thunderbolt enclosure for $300 when a USB3 one is much less and offers the same performance?


Some older Macs don't have USB3 but do have TB.

Also for those who use external drives as boot disks, while you can boot from both USB3 and TB, some people prefer booting using the TB interface since it supports AHCI commands that are not passed over USB3 (like Trim).

In terms of wasting your money, this is about as stupid as it gets.


Why, because you think it is all about speed?

The TB interface is flexible. Speed is only one of the benefits it gives you. If you boot off these drives, TB is preferable to USB.

However, osx11 has confirmed it. He knows best how other people should spend their money. The extra font size really shows he's serious.
Score: 5 Votes (Like | Disagree)

Image (http://www.lacie.com/imgstore/more/Overview_images/RuggedTB_USB3/RuggedTB_USB3_8_EN.jpg)
What is the point of a single disk Thunderbolt enclosure for $300 when a USB3 one is much less and offers the same performance?


Some of the older macbook pro's don't have a USB 3 port, but they do have a thunderbolt port.
Score: 5 Votes (Like | Disagree)

Spinning disks != rugged. Whatever genius thought of marketing a spinning disk as a rugged device MUST own stock in a data recovery company or two.
Score: 4 Votes (Like | Disagree)
Read All Comments