TechCrunch has done some digging and discovered a company called Twin Creeks that GT Advanced acquired late last year. Twin Creeks developed a hydrogen particle accelerator (pictured below) as a cheaper alternative to saws when attempting to slice larger chunks of sapphire for use on electronics. 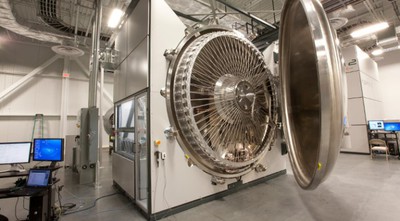 Twin Creeks’ hydrogen ion particle accelerator (basically an ion cannon) allowed them to place wafers around the edges of the device and smash them with hydrogen ions. Here’s a description of the process from Extreme Tech:

"A particle accelerator bombards these wafers with hydrogen ions, and with exacting control of the voltage of the accelerator, the hydrogen ions accumulate precisely 20 micrometers from the surface of each wafer. A robotic arm then transports the wafers to a furnace where the ions expand into hydrogen gas, which cause the 20-micrometer-thick layer to shear off."

The process, when applied to solar, is then followed up by backing the sheets with flexible metal. The result is a huge reduction in thickness of sheets without the use of saws. This results in a big reduction in costs.

According to the press release GT Advanced released last week, GT expects to see its gross margins to drop significantly as sapphire glass production rises -- as costs go down -- but the overall volume will more than make up for it.

TechCrunch goes on to note a patent that Apple got last year that creates a layered touchscreen with a "hyper-thin sheet of sapphire" combined with much cheaper glass sheets. The sapphire glass could be on the outside of the phone, protecting the screen from scratches, while enjoying the cost-savings of cheaper forms of glass on the rest of the display assembly.

By doing this, Apple could stretch out the production and cost factors of sapphire enough to support manufacturing full-size display cover sheets, not just small wearable panels, buttons or protective camera covers. This, in turn, could mean sapphire cover sheets that are harder and tougher than standard glass materials on your iPhone years sooner than most analysts have predicted.

The new Apple/GT Advanced facility is expected to open in Mesa, Arizona sometime next year.

I'd love to see the cost of the saws if a hydrogen particle accelerator is the "cheaper" alternative...

Either way very cool that they can do this.


The problem is that the saw blade is relatively thick so that you wind up losing most of the sapphire to the saw cut. Using the proton method there is virtually no wasted material.

Accelerating protons into sapphire is a clever idea. Charged particles in solids lose energy as 1/E. This means that the slower they move the faster they they slow down. This is why they all wind up at roughly the same depth. The protons acquire an electron from the matrix becoming hydrogen. When the boule is heated the gas expands and a thin slice cleaves off the boule.

Interesting that they will layer 20 microns of sapphire over glass. Sapphire is extremely hard but it might not be tough. Perhaps the combination is both scratch resistant and fracture resistant.
Score: 5 Votes (Like | Disagree)

rei101
All that 21st century technology just to receive a phone call from someone to tell you your girlfriend is cheating on you.
Score: 4 Votes (Like | Disagree)

josh.b
Tomorrow Samsung will have one too
Score: 4 Votes (Like | Disagree)

But I'd be more impressed if it were portable (say, backpack sized) and fired a stream of protons which could trap ectoplasmic entities.
Score: 4 Votes (Like | Disagree)

Woogaloo
I'd love to see the cost of the saws if a hydrogen particle accelerator is the "cheaper" alternative...

Either way very cool that they can do this.
Score: 3 Votes (Like | Disagree)

Pretty amazing innovation for a company that can't innovate anymore.

They're the company that published the particle beam saw idea in 2012 for solar cells, and that's why GT Advance bought them the same year.

The combination is what attracted Apple to GT Advance.
Score: 2 Votes (Like | Disagree)
Read All Comments