Folding@home participants receive work units as computation assignments. Completed work units are assigned points based on their value to the project's scientific purposes. Extra points can be earned for speed, reliability, and the use of multiple machines. Led by top contributors rwh202, twoodcc, and whiterabbit, Team MacRumors has completed over 1.1 million work units since the team formation in May 2002 by MacRumors owner Arnold Kim. The team currently averages over 4000 work units and over 2 million points per month. Forum members have been watching for this milestone for months.

Additional team statistics and graphs can be viewed at Extreme Overclocking.

We congratulate the currently active MacRumors Folding@home team members and the thousands of others who have participated over the years. We invite everyone who is interested to join our team! 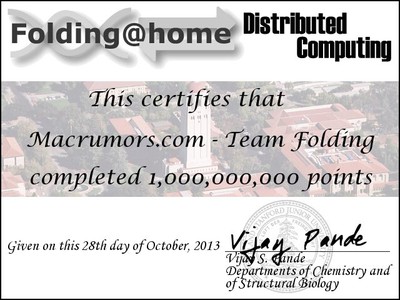 Folding@home, run by Stanford University since October 2000, is a distributed computing project under which computers run protein folding simulation software in their idle time, helping researchers search for cures for Alzheimer's disease, Huntington's disease, Parkinson's disease, AIDS, influenza, and many forms of cancer. The software simulates how proteins, RNA, and nanoscale synthetic polymers fold, both to gain understanding of how proteins fold into their three-dimensional structure and to study the causes of the abnormal folding that leads to disease. To date, over 100 scientific research papers have resulted from Folding@home.

cclloyd
Why is this not on the front page?
Score: 8 Votes (Like | Disagree)

I agree it should be front page, it will recruit new people to the team.
Score: 6 Votes (Like | Disagree)

OrangeSVTguy
Way to go everyone. Folding with a small computer for 20 points or multiple super computers for 20 million. Every little bit helps and counts for the main reason for folding. We're all doing it for the greater purpose of finding a cure.

Who knows, that one protein that you help fold a few years ago could end up saving your life 15 years from now.
Score: 4 Votes (Like | Disagree)

With those new Mac Pros with their dual FirePro graphics we'll get to two billion in no time!

Seriously, congrats! I love how our fairly small community can rank up with the "big boys" of folding - fighting back with the power of the Mac! (Fighting back to cancer that is!) 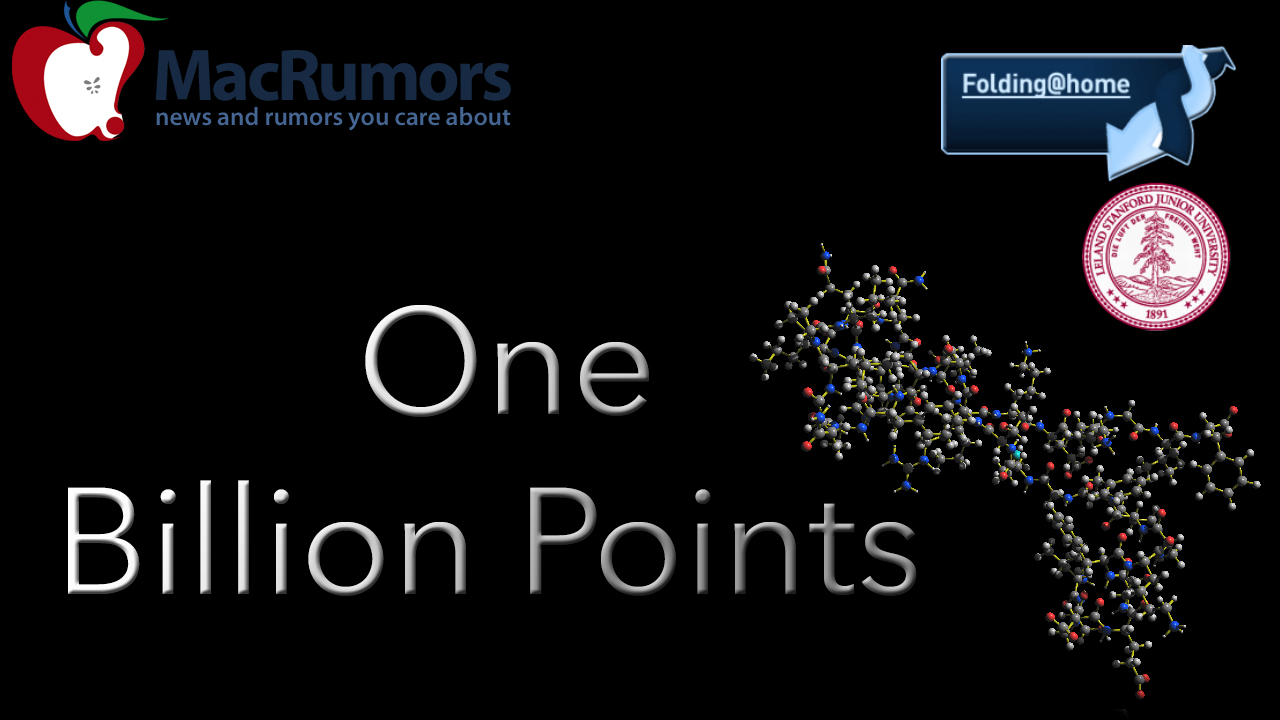 laurihoefs
Oh my, I didn't even know there was a MacRumors folding team. I might switch teams soon :)
Score: 4 Votes (Like | Disagree)
Read All Comments

Tuesday April 13, 2021 10:45 pm PDT by Juli Clover
The upcoming 2022 iPhone lineup will feature two 6.1-inch devices and two 6.7-inch devices, with no mini-sized 5.4-inch iPhone, well-respected Apple analyst Ming-Chi Kuo said in a note to investors that was seen by MacRumors. Two of the iPhones will be high-end models and two of the iPhones will be lower-end models, similar to the current iPhone 12 lineup. Apple introduced the 5.4-inch...
Read Full Article • 170 comments