Following Apple’s iPad-centric event where the company unveiled its latest iPad Air and iPad mini with Retina display, event attendees have been able to go hands-on with the new devices, which will be available in November. Below are some first impressions of Apple’s newest tablets, both of which feature some radical improvements. 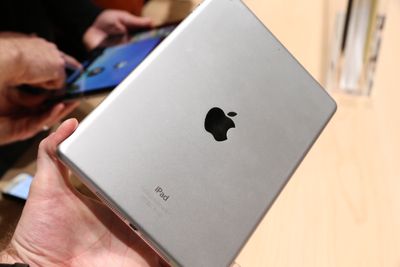 According to Engadget, the iPad Air is much slimmer and lighter, but it doesn’t feel cheap. While the size differences aren’t immediately apparent, the lighter weight is noticeable and the A7 processor is a major improvement.

Naturally, iOS 7 looks great on that Retina display – but you knew that already right? What’s really notable here, however, is just how zippy things are, thanks to the inclusion of an A7 chip, the same one introduced on the iPhone 5s. You really notice that speed when launching apps like iMovie, which boots up in an an instant. With a chip like this, you should be getting around the new free version of iLife pretty swiftly.

The Verge calls the iPad Air "really beautiful," with "cleaner bezels" and a thinner profile. It’s notably faster with the A7 processor, and fits better in a single hand.

Long story short: it looks and feels like a larger (but not that much larger) iPad mini, and that’s mostly a really good thing. It’s really beautiful, with cleaner bezels, a much thinner profile, and sharper, boxier edges.

Along with the new A7 processor and a handful of under-the-hood improvements, this is just about the upgrade we expected, but more than ever the iPad Air feels like you’re just holding a big screen full of the internet. That’s probably a good thing.


SlashGear notes that there’s a definite "wow-factor" when picking up the iPad Air.

The slimmed down bezels on the sides make a considerable difference to how it feels in your hand, leaving the tablet as a whole feeling somewhere in-between the 4:3 aspect of its display and the 16:9 of most rival Android slates. There’s still enough room to grip it, however, without overlapping the display too considerably.

It’s the little details that you notice after a while, however. The chamfering to the casing where it meets the toughened glass of the fascia, for instance, or the slimline side controls and lock-switch. Unfortunately there’s no Touch ID embedded into the home button, but we can see ourselves holding the iPad Air for longer periods since the 1-pound weight is almost a third reduction on the old model.

Apple’s newest iPad mini is similar to the first iPad mini, though it is slightly thicker and heavier. Engadget didn’t notice any major changes to the feel, but did note that the processor seems faster than the original.

There isn’t much on the outside that we haven’t seen before – in fact, it still sports the same home button, indicating that it doesn’t feature Touch ID – but there is one glaring exception: the Retina display. When compared to the original iPad mini that came out last year, this is a rather significant bump in pixel density, and we came away much more impressed with the mini as a result.

According to CNET, the iPad mini feels exactly like the first generation version and looks even sharper than the full-sized iPad Air.

However, while it feels great, it’s all about that screen. And given the Mini’s smaller 7.9-inch size, it looks even sharper than the full-size iPad Air. But to take advantage of the new pixel-dense screen, you will be paying up over last year’s Mini. It’s gorgeous, though, so I’d imagine the new premium will definitely be worth it to some people.

The Verge notes that the Retina mini is noticeably faster and smoother, with sharper, more readable text.

The same 7.9-inch display now features four times the pixels, a full 2048 x 1536 resolution, which makes text sharp and readable. Just as importantly, it makes iOS 7 look much better than it does on the original iPad mini, which often feels a little out of place on lower resolutions. iOS 7 also benefits from the iPad mini’s new 64-bit A7 processor, making scrolling and everything else notably faster and smoother.


TechCrunch calls the Retina mini’s screen "excellent," noting that it will be a dramatic change for users who are coming from a first generation device.

The eye-boggling 2048 x 1536 screen looks excellent in person, and for anyone coming from a generation one device it’s going to be a dramatic change. The iPad mini itself is very slightly thicker and heavier than its predecessor to accommodate the Retina Display with the same battery life, adding 0.01 inches and 0.05 pounds to the specs of the original, but that makes minimal difference to the actual feel of the product in the hand.

Apple’s iPad Air will be available beginning on November 1, while the Retina mini will come later in the month. Both tablets feature a 64-bit A7 processor, Retina screens, and ultra-thin designs.

No Touch ID? Now I'm gonna think twice before buying an iPhone 5S contemplating whether Apple is actually going to expand this technology anytime soon. And so are many other people.


sure, pal. youre not going to get something that saves you time because its not on *other* devices, despite the fact that it didnt even exist as a feature a month ago.

interesting logic some of you have.

the sensors are likely supply constrained and reserved for meeting the enormous iphone demand.

I was hoping for AT LEAST an IGZO display if nothing else.


as a software developer and avid apple product purchaser, i have no idea what an IGZO is or why i need one on my tablet. i suspect that i dont.

Battery life is the same,


considering they upped its processor with dramatic performance gains, and reduced its weight by a 1/3, that it did not suffer battery is impressive indeed.

screen is EXACTLY the same,

it has the processor of a phone,


do you know how childish you come off? really? the iphone has an amazing processor, the processor of a high-powered tablet. see what i did there?


iOS 7 is currently just a stretched out version of the iPhone version for iPad.


what on earth is that even supposed to mean?


the disappointment is inside you. truly. i see all the same products and think they sound great. they offer much value to me and i look forward to investing in them as new tools.
Score: 27 Votes (Like | Disagree)

That's amusing. It has a brick shape (as are all other tablets). What exactly is so beautiful about it? One could not come up with a more boring shape even if he tried.


Someone like you might not be able to distinct between the form factors of lets say the iPad1 and the iPad3 and the iPad mini, but I'm pretty sure that the average user notices a big difference in feel and look.
Score: 27 Votes (Like | Disagree)

iBreatheApple
Haven't been on the forums today so I'm not sure if people have been bitching but My God, I cannot believe the new iPads lack touchID.
Score: 21 Votes (Like | Disagree)

These iPads, specifically the Mini, are going to dominate the holiday shopping season. I can't imagine any product being more sought after this year.

Yup, just as figured, not sure whether to go iPad Air or iPad Mini.

I'm leaning toward 32GB/white/Wi-Fi iPad Mini, but then again, might just wait until next year when it presumably gets Touch ID.

I'll definitely have to check both out in person!

And then next year, you'll have to wait because of another new feature etc...

Live in the now! The new mini is an astronomical upgrade and is basically a smaller iPad Air. Touch ID isn't worth waiting a year for IMO.
Score: 20 Votes (Like | Disagree)

Mjmar
Very glad that they put the mini on par with the full size iPad as far as internals go. iPad Mini it is!
Score: 16 Votes (Like | Disagree)
Read All Comments