During today’s iPad-centric event, Apple announced that more than 20 iOS and Mac apps would receive updates over the course of the day. Aperture, Apple's photo editing and management software, has just been updated to version 3.5 adding new features and bug fixes.

The update includes support for iCloud Photo sharing, allowing users to post content to shared streams and add videos to photo streams. Aperture’s "Places" feature uses Apple maps to display photo locations, and integration with Smug Mug has been included. Multiple bug fixes have been bundled into the update, and stability and performance improvements have been added as well.

- Adds support for iCloud Photo Sharing, including the ability to post videos to shared photo streams and to have multiple subscribers contribute to a shared stream
- The Places feature now uses Apple maps to display photo locations
- New integration with SmugMug, with support for publishing and syncing galleries directly to a SmugMug account
- Adds support for iOS 7 camera filters applied to photos imported from iOS devices
- Fixes an issue that sometimes resulted in Retouch adjustments not being applied to exported images
- Addresses an issue that could cause the black and white points in Curves to shift incorrectly when using the eyedropper tools
- Fixes a problem that prevented caption data from being embedded correctly when exporting versions of some RAW file types
- Improves reliability when adding names to Faces
- Addresses an issue that could cause Aperture to hang after adjusting a very large panorama
- Fixes a problem that could prevent memory cards or hard disks from ejecting properly after import when clicking the Delete Items button
- Improves reliability of slideshows on a 15" Macbook Pro with Retina display
- Addresses an issue that could cause thumbnails to display incorrectly in the iLife Media Browser
- Videos up to three minutes long can now be shared to Flickr
- Captions instead of version names are now synced between Aperture and Facebook for newly-created albums
- Improves reliability when printing a light table
- Fixes an issue that could prevent adjusted images from being published to My Photo Stream
- Includes stability and performance improvements

Aperture can be downloaded from the Mac App Store for $79.99. [Direct Link]

RabidMacFan
Sure, the Aperture update for those that purchased the DVD isn't in the App Store yet. But the day isn't over. Calm down before you jump to conclusions.
Score: 4 Votes (Like | Disagree)

ipedro
This is just a maintenance update to comply with Mavericks with some features thrown in. It's probably the final update for Aperture 3. The "New Aperture (https://forums.macrumors.com/showthread.php?t=1657341)" that Phil Shiller leaked on stage has an all new UI: 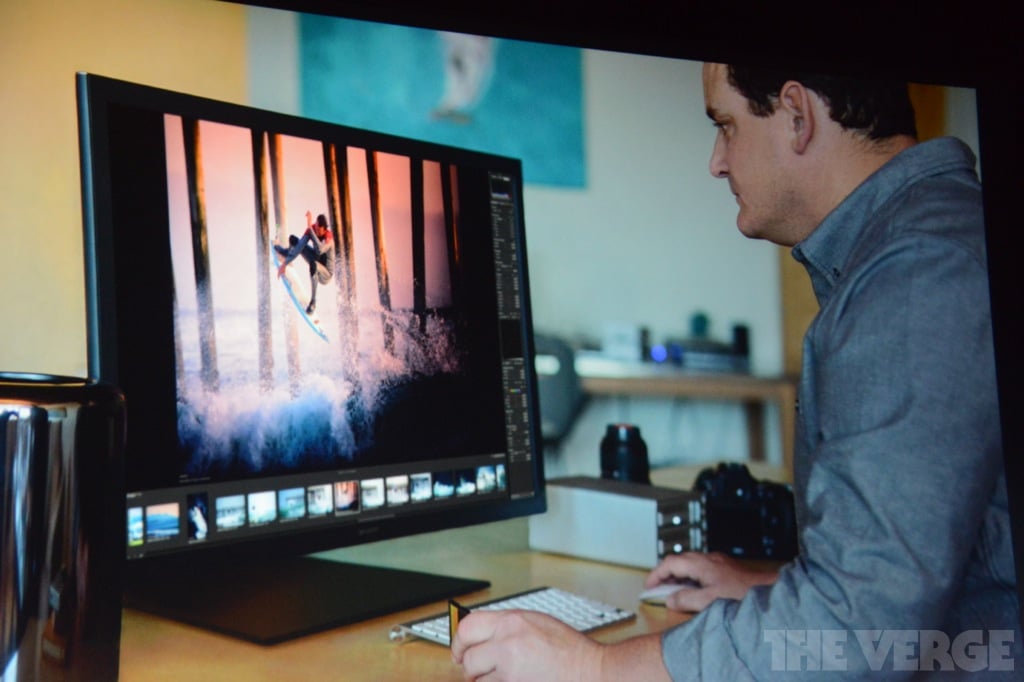 I'm trying to find a UI arrangement where it looks like the one in the photo and I can't. I have a 27" iMac display and there's no way the HUD gets that narrow. Also, the spacing between thumbnails is much tighter. What tool is that multi colour bar in?

Phil did say "a new version of Aperture" but I guess that can mean a point update but I'm inclined to think this is a new version.

Either way, we know from hiring and from general common sense that Apple is working on a new version of Aperture. What we're all dying to find out is not "if" but "when". I think timed with the release of the new Mac Pro makes sense.

2. The color "bar" is the Colors adjustment panel. Has been in Aperture 3 forever.

3. DVD-based Aperture installs will be upgraded to Aperture 3.5. Some suggest waiting. For me, going to App Store > Featured > Quick Links > Account > Reset Warnings made Aperture (old DVD-installed version) show up in Updates (once I did that on one computer, it showed up on all computers on that account). Others have suggested that changing from non-English to English in the system language fixed the lack of updates. This applies to Aperture, iWork, and iLife DVD-originated installs.

Still no Update option for me and Apple's Support Downloads page doesn't show the 3.5 update either.

Heck, there aren't even release notes for this version in German!
Did they just compile it or what? Come on Apple, step it up.


Change your system language to English and see if that fixes it (then change back, obviously). It appears that non-English Mavericks installs aren't seeing the updates, but flipping that preference temporarily fixes the problem permanently.
Score: 2 Votes (Like | Disagree)

zorinlynx
Just now, Apple offered to associate my Aperture 3.5 installation with my App Store account. Now it shows up as a purchase and I updated it on all my machines without trouble.

It's about time! No more having to enter three freaking serial numbers (been upgrading since 1.0!) every time I want to install it.
Score: 2 Votes (Like | Disagree)
Read All Comments